In memory of my teachers, 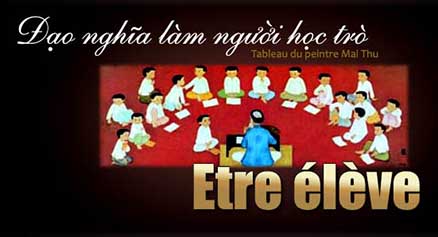 Being student in Vietnam

No Vietnamese can remain impassible when it comes to recall the years of study spent at school with their teacher. The image of their school keeps on being intimately carved in their memories.

That is the way composer Phạm Trọng Cầu felt in his song Trường Làng Tôi ( My village school ). How could they forget what has contributed in giving them their education, teaching them, and putting them on the road of apprenticeship in life? For them, one word taught by or one day of study with their teacher is enough to justify the obligation toward him. 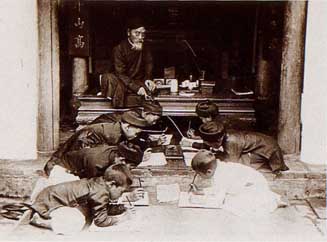 The one who teaches us for one day or even half a word is worth being our teacher. Without the teacher, they cannot become who they are today. They owe him part of their life, their success and above all their education because it is him that gave them not only knowledge but also taught him the wisdom and apprenticeship of life. The following famous remark : Không thầy đố mầy làm nên ( Without the teacher you cannot succeed ) continues to occupy their mind and justify their behavior, their deep feelings toward their teacher. They give him such a crucial role that they do not hesitate to use the word « teacher » ( or Thầy in Vietnamese ). Thầy is sometimes used to address the father because it is he that gave them the first lesson in education. That is why the teacher remains the second person to be respected in the unchanging following Confucian trilogy: Quân, Sư, Phụ.

Whichever their age, position and level of education, they continue to remain the little pupil, the young disciple of their teacher.

They are not willing to neglect their respect toward their teacher even in moments the most perilous in their life. This was shown by emperor Hàm Nghi toward his teacher before the colonial authorities who were not able to identify Hàm Nghi physically when he was captured. The only person who could identify him was his teacher; therefore the latter was brought by force before the young Hàm Nghi. For the respect of his old teacher, he could not let him kneel down. He was obliged to prevent his teacher from executing this gesture. Because of this inopportune attitude, he was thus identified by the colonial authorities. He preferred to die instead of making an irreparable mistake toward the one who had taught him not only dignity and courage but also the duty toward his people and country. It was also the case of emperor Duy Tân with is tutor Eberhard in charge of supervising and reporting all his activities to the colonial authorities. Instead of being hated, he became one of the people that Duy Tân continued to respect during his reigning years. It was a habit to say in Vietnamese:

Kính thầy mới được làm thầy.
We should respect our teacher before becoming a teacher later.

It is in this Confucian spirit that young Vietnamese students were raised. They always try to listen to their teacher. They sometimes adopt an ambiguous attitude so as not to vex or bother their teacher even though when they are not entirely in agreement with him. It is the respect that emperor Gia Long knew how to maintain toward his tutor and spiritual guide, the bishop of Adran, His Highness Pigneau de Behaine during his reigning years. Age is not a factor in the behavior of a student toward his teacher who in several occasions was younger than him. It is shocking and moving to see sometimes an old student crossing arms in front of a young teacher but that never contradicts the intimate sentiments, the profound and sincere attachment he continues to keep for his teacher the way he does for his mother and his country. He knows what his teacher expects from him. He tries to keep up with this expectation, which sometimes puts him in a delicate and aberrant situation where he is himself in competition with his teacher.

It was the case of Phạm Duy Tri with his teacher Nguyễn Khắc Kínhduring a royal examination that took place in 1562 under the Mac dynasty. Issue of a very poor family and orphan of father at very early age, he was raised by his mother who did not hesitate to offer the teacher the only buffalo she possessed in order for the latter known for his years of experience in teaching in the village, to accept her son as his disciple. Moved by this mother’s sacrifice, teacher Nguyễn Khắc Kính agreed to take him as his student. A few years later, thanks to his assiduity and intelligence, he ended usentiments the latter always reserved for him, he did not want his student, because of the respect he had toward him, to be penalized and wop in surpassing his teacher, which the latter saw during the provincial and general exams where he was himself a candidate. Knowing perfectly well his student’s state of mind and his profound uld not put all his weights and ardor in the royal examination. For that, he told his student:

If you do not want to be brilliant in that exam, I would understand your behavior, your feelings. But you have to remember that this examination is reserved for the one who deserves to be chosen to serve the country. You must take into account the interest of the nation before any personal considerations. You should not betray your ideals and your country.

He reminded him the sentence that any school teacher would repeat to his student:

Do not concede to your teacher what you deserve.

Moved by the advice, Phạm Duy Tri nodded his head and kept what his teacher had told him. He passed the royal exam and acquired the title of Trạng Nguyên ( 1st doctor ). As for his teacher, he was classified second and received the title of Bảng Nhãn ( or 2nd doctor ).

The feelings that a Vietnamese has for his teacher never fade with the time, which was shown by lord Nguyễn Phúc Nguyên toward his spiritual teacher and counselor Ðào Duy Từ. To thank him, lord Nguyễn Phúc Nguyên did not hesitate to grant him a vibrant homage by giving to one of his fortifications located in central Vietnam the name « Lũy Thầy » (fortification of the Teacher ). This fortification was built to counter the Trinh from the north. Thanks to this naming, he was successful in giving gratitude a wide range through history and the entire nation. Today the fortification is still known by this name.

On the other hand those feelings become as the time goes by a kind of cement that link a Vietnamese a little more to his school, his village and his native country. They are also a gift of affection and respect that Vietnamese love to give their teacher in the Confucian spirit.