Long time ago, Vietnam was a country half-wild, half-cultured, infested with wild beasts that cohabitated with men in deep caves in the forest. Lived then a young man named Lạc Long Quân intelligent and endowed with extraordinary powers. In his vein flowed a bloodstream mixed with the blood of the Dragons form Bách Việt country. During his travels through mountains and valleys, he arrived at a maritime region of southeast Lac Việt. Seeing the population decimated by a marine monster, he took a spear that he got red hot in fire and threw in the mouth of the monster killing it. He cut its body in three pieces which he threw into three different places that received three geographical names: the head was in a mountain named Cầu Dầu Sơn, the body in another mountain Cầu Dầu Thủy and the tail in the islet called Bạch Long Vỹ. 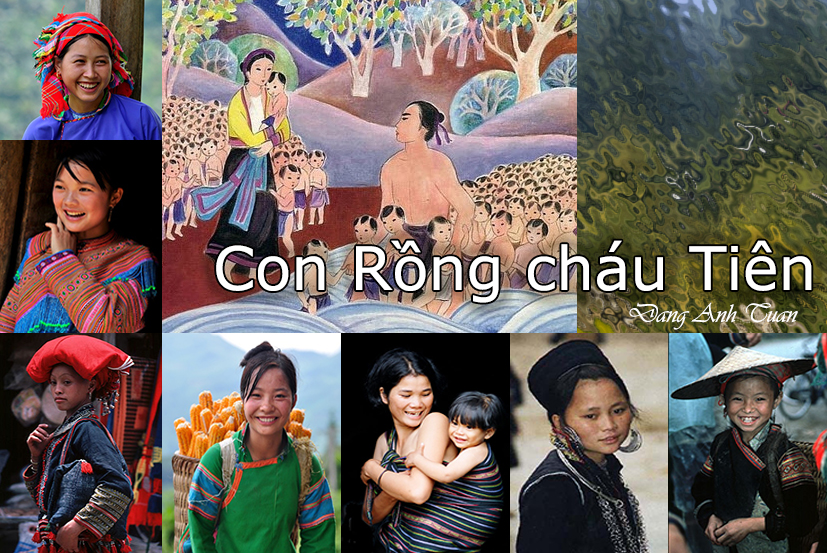 Once the people of Lac Viet in peace, the hero headed for the Long Bien region where its inhabitants were terrorized by a fox which became a monster. The latter often turned itself into a young man to enter villages taking away women and young girls. Lac Long Quan had to fight for three days and three nights before beating the monster and entering its cave to free his survivors. Arriving at the Phong Châu area, he confronted the monster of trees so ferocious he had to turn to his father Kinh Dương Vương to chase it to the South. After having brought peace to the three countries, he was so moved by compassion for such an unfortunate and simple people. He decided to stay to protect and teach them how to grow rice, cook it, cut trees to build homes that sheltered them from rain, wind and savage beasts. He educated them in the family virtues of parents and spouses. The people revered him and considered him as their Chief. They also considered him as their father, the one who gave them their lives.

Before he joined his mother in the Palace of Waters, he recommended to his people, in case of misfortune, to call him aloud: Father. And he would come back right away. Some time later, the Lord of the High Regions of the North, Ðế Lai, leading his troops, invaded Lac Viet while bringing with him his delightful daughter Âu Cơ. De Lai oppressed and fleeced the people who had to supply his army with meat and rice. In distress people called: Father, come back and save us. Lạc Long Quân was on the spot, but did not find De Lai. Au Cơ was there alone, out for a walk amid her servants. Dazzled by her beauty, he took Au Cơ to his palace. Au Cơ herself, charmed by the young man, consented to live with him. Ðế Lai, coming back in rage, sent his troops out to besiege the town.

But Lac Long Quan commanded savage beasts to push him back. Incapable of struggling against such a strong son-in-law, Ðế Lai withdrew from Lạc Việt, leaving his daughter on the strange land.

Lac Long Quân with the monster

Amid their happiness, Au Cơ brought to the world a big pouch from which got out one hundred eggs that gave birth to one hundred sons as robust as their father. When came the time to separate and return to his mother, Lạc Long Quân told his wife Au Cơ : « You are of the race of Immortals. I am of that of the Dragons. We cannot stay together for the rest of our lives. You need to live up high. I need to live down by the sea. So you stay here with fifty children. I will bring the other fifty to the maritime region, we settle on the same land ». From then on, Au Cơ stayed in the mountains with her fifty children. Those became the ancestors of all the peoples living nowadays on high plateaus and mountains (these are the montagnards and minorities ). As for Lạc Long Quân, he descended on the plain, by the sea, with his children that he taught how to clear the land to establish a kingdom there. His eldest son became thus the first king of Vietnam and took the dynastic name of Hùng Vương and called his country Văn Lang.