In the  territories conquered by  the Han, in particular in the South China, the Chinese assimilation continued in full swing. That is why revolts firstly  succeeded each other in the Dian kingdom (Điền Quốc)  (86, 83  before J.C., 14 after J.C., from 42 to  45 ). They were repressed with severity. These upheavals were largely due to   the Han officials exactions and the Chinese settlers’ behaviour in possession of fertile soils and expulsion of local people in remote  corners on his territory.  In addition, the latter had to adopt the language, customs and religious beliefs practiced by the Han.

In year 40, a serious rebellion broke out in Jiaozhou province (or Giao Châu in Vietnamese) including at this time, a great  part of  Kouangsi  and Kouang tong territories. It was led by the local prefect’s daughters, the elder Trưng Trắc (Zheng Cè)  and  her youngest daughter Trưng Nhị (Zheng Èr). As the husband of the elder Shi Suo (Thi Sách) opposed the Chinese assimilation policy conducted  brutally  by the Chinese proconsul Su Ding (Tô Định), the latter did not hesitate to kill him for making an example against Yue rebels. This killing revolted sisters Trưng and trigged immediately the insurgent movement in Yue territories.

intended to maintain the mat edges thanks to its weight.

Sisters Trưng succeeded in gaining control of 65 citadels for a very short period of time.  They were  proclaimed Queens on conquered territories and etablished themselves in Meiling (or Mê Linh). In year 41, they were defeated by Chinese general Ma Yuan ( Mã Viện, Phục Ba tuớng quân)(the flow tamer) and preferred the suicide instead of the reddition by pluging into the Hát river. They thus became the symbol of Vietnamese resistance. They continue to be venerated today not only in Vietnam but also in certain areas of Yue territories belonging to China (Kouangsi et Kouang Tong). Ma Yuan began to apply a policy of terror and assimiltaion at forced march by placing at all level administration, Chinese trustwothy men and imposing the Chinese as the official language over the territory of the Vietnamese. It is the first Chinese domination during just 1000 years before the war of liberation started by General Ngô Quyền. In the meantime, Guangwudi  (Quang Vũ Đế) succeeded to bring prosperity and stability in his empire by reducing the tax on crops and profits. After his death,   his son Mingdi (Hán Minh Đế) imitating Wudi, pursued the policy of expansion by taking an offensive against the northern Xiongnu (Hung Nô)  with the aim of releasing the States of Central Asia from the guardianship of the latter and restoring the security of the silk road (con đường tơ lụa) for the benefit of China. Being the brother of Ban Gu (*)(Ban Cố) historian of this time, General Ban Chao (Ban Siêu)  was in charge of this  military expedition. He succeeded in reaching the sea Caspienne and subduing the  Yuezhi (Nguyệt Chi or Nhục Chi) thanks to the Kusana assistance. 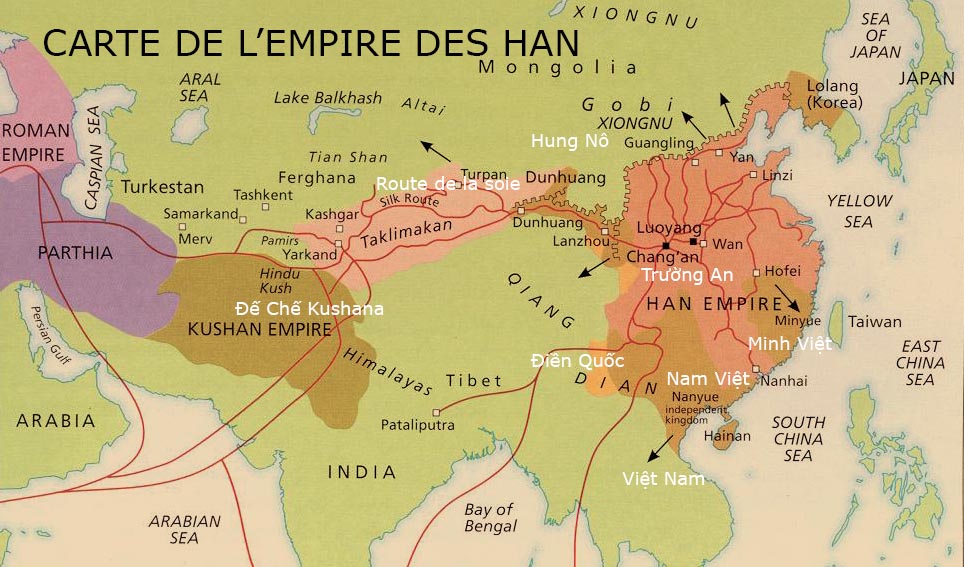