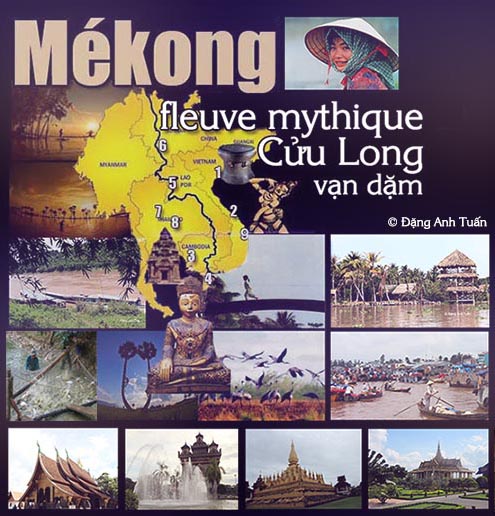 It is a source of inspiration for great civilizations of South-East Asia, in particular that of Cambodian and Óc Eo. The Mekong River is at the heart of six countries: China, Burma, Laos, Thailand, Cambodia and Viet Nam.

According to the report published by the World Wildlife Fund (WWF), more than 1068 plant and animal species have been discovered by scientists in the Great Mekong River region. It is the richest River in the world in terms of biodiversity, but it is also the river where  fauna and flora are very threatened because of deforestation, construction of hydroelectric dams, overfishing and illegal trade of animals. (source GEO). Since 2002, scientists have discovered in Great Mekong region  367 animal and plant species among which there are 24 fishs, 21 amphibians, 28 reptiles, a bird and 3 mammals.  The flying squirrel with red and white fur, the water snake wearing the mask of Zorro and the blind spider are part of the lot of discoveries.

Its length varies from 4303 km to 4909 km and its medium flow reaches 284 water km3 a year. It is the tenth river of the world and the fourth in Asia in terms of flow (after Yangzi Jiang, Gange-Brahmapoutra and Ienisseï). Escaped from the Tibet’s heights , it initially crosses the Yunnan area (China) it then becomes the river border separating Burma and Laos on 236 km and finally that of this latter with Thailand on 1865km. It then opens out in the immense plain of the Four Branches of Cambodia and finishes in the Vietnam plain entitled « Plain of rushes » with two principal meanders: Bassac and Mekong itself. (Hậu Giang and Tiền Giang in Vietnamese) before throwing itself in the East sea (Biển Đông). One identifies the fifteen most attractive sites along Mekong from China to Viêtnam: