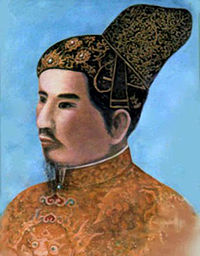 Gia Long is the imperial title prince Nguyễn Phúc Ánh took in 1802 for his reign at the time of the reunification of the Vietnam empire which extended from the border of Lạng Sơn to the point of Cà Mau on the gulf of Siam.

Gia long results from the combination of two following words: Gia and Long (Gia being a word extracted from the name Gia Định, the ancient city of Saïgon and Long that of the name Thăng Long, the ancient capital Hànội). During the 25 years of fighting against the Tây Sơn, he roamed the whole Cochinchina. He knew perfectly well all the corners of the Mekong delta. Prince Nguyễn Ánh was so attached to the people of the South and in particular to Saigon city that he was khnown at the time as « General Gia Định ».

Before the unification of Vietnam (1801), the last survivor of the Nguyen was hunted down several times by the Tây Sơn ( or the people from the West ) of Nguyễn Huệ. He owed his safe life to a French missionary Pierre Joseph Pigneaux de Behaine who shared with him his meal brought in by a confidant, P. Paul Nghi, and who did not hesitate to organize his escape in the Cancau principality of Mạc Thiên Tứ, the son of his allied Mạc Cửu Hà Tiên region) after the assassination of Nguyễn Huệ. Vương by the Tây Sơn, which is told by the British John Barrow in his book  » Voyage in Cochichina » in 1793.

The tough life he experienced during his years of vicissitude gave his partisans an occasion to interpret later his exploits and perils that he succeeded in overcoming as a sign of God’s will in helping him to regain the throne. The grotto of coins (Hang Tiên) in the region of Ha Tien, accessible nowaday by boat, evokes the souvenir of the young prince Nguyễn Ánh, who took shelter there with his troops while waiting for French reinforcements. One  finds coins left by pirates. Vietnamese sayings go with his exploits, such as:

The varanus is in front of the prow

to mean a task cannot be done because of the obstruction of someone. Thanks to the presence of a monitor that blocked his junk on its way to the sea, he was narrowly saved because his enemies were waiting for him there. Another time in the region of Ha Tien, his junk was bothered by the presence of snakes. He was forced to give order to his subordinates to row faster so as not to be pursued by the snakes. This allowed him to reach Phú Quốc island sooner and avoid the trap set by his adversaries. That is why a Vietnamese saying goes:

Thoughout historical accounts, it is noted that Nguyen Anh was lucky during the years of fighting with the Tây Sơn. One time he was chased by the enemies. He was forced to cross a river by swimming. He was aware that the river was infested with crocodiles. He had to resort to buffaloes that splashed about the riverside to take him over. Even the perilous rescue of his boat engulfed by waves by the young intrepid Lê Vân Duyệt (15 years of age ) who later became his talented general, in a stormy night was the object of prophecy discussed for so many years by the people of Long Hưng Tây village before the event took place.

In spite of these facts having something to do with legitimizing by divine protection the struggle led by Nguyễn Ánh, it is not fair to ignore the qualities in this outstanding personage. He did not have the genius of strategy of his adversary, general Nguyễn Huệ. But he had an incommensurable patience parallel only to that of Gou Jian (or Cẩu Tiễn in Vietnamese ), the prince of Yue in the North at the episode of Spring and Autumn ( thời Xuân Thu )( 476 B.C ) who waited long years to get ready for revenge against Fu Chai ( Phù Sai ) the Wu State’s sovereign ( nuớc Ngô của Ngủ Tử Tư ).

He was gifted at being able to recruit as subordinates individuals of valor ( Võ Tánh, Lê Văn Duyệt, Nguyễn Văn Thành etc…) and grant to frienship a particular signification during his reign, which has been noted towards French missionary Pigneaux de Behaine or his French lieutenants Jean Baptist Chaigneau ( Nguyễn Văn Thắng), Philippe Vaniera, Olivier Puymanel or Siamese king Rama I ( or Chakkri ).

In acknowledgement of the debt that Nguyễn Ánh had let him go back safe and sound with his army to rescue his imprisoned family, the latter was fast to offer many years of hospitality to prince Nguyễn Ánh and his suite when he was forced to take refuge in Bangkok after his scathing defeats against the Tây Sơn at Mỹ Tho (1785).

Nguyễn Ánh was a brave and tough man. With him it seems like there is no one in the South who dares to oppose him. To repay the debt toward his family assassinated by the Tay Son, he remained unruffled before the tortures he reserved for his adversaries. The vanquished enemies were put to death by appalling tortures. Men were torn and women and children were stamped by elephants. Their corpses were thown in the field for crows to eat. It was the fate reserved for the female general Bùi Thị Xuân, the son of emperor Nguyễn Huệ, king Nguyễn Quang Toản etc…

This pact of friendship was born in a military confrontation between his lieutenant Nguyễn Hữu Thùy and Chakkri which was still a general sent by the Siamese king Taksim (Trịnh Quốc Anh ).

Before the volte-face of Taksim imprisoning his family, Chakkri was forced to compromise with Nguyen Anh and return to Bangkok to overthrow Taksim. To recognize this debt and to assist Nguyen Anh to recover the throne, Chakkri sent an army of 50,000 men which was completely decimated in 1785 by the strategist Nguyễn Huệ in the western Mékong (Mỹ Tho).

For political reasons, he did not hesitate to kill people who had served him with devotion when he was still a young prince hunted down by the Tây Sơn. It is the case of Nguyễn Văn Thành, Ðặng Trần Thường. That is why he was ofen compared to Liu Bang (Lưu Bang), the great Han emperor having reserved the same treatment toward his comrades-in-arm. Despite that, he was also seen as a man of the heart. He was fast to render great homage to his comrade-in-arm Nguyễn Văn Thành whom he forced to commit suicide for a calomnious insinuation and burst into tear before the altar set up in honor of the latter. He ordered freedom for his family and restitution of confiscated possessions and titles. One also finds his profound attachment to his subordinates’ lives through the message addressed to his brother-in-law, general Võ Tánh in charge of defending Qui Nhơn or to Pigneaux de Behaine, his spiritual father, military advisor through the ceremony arranged at the funeral of the latter, which was reported by Father Lelabrousse at the Missions Etrangeres on April 24, 1800.

He was also a seducing warrior. His consideration toward queen Ngọc Bích, the young wife of his adversary, young king Cảnh Thịnh (son of king Quang Trung) was exemplary. She was crying out when she saw a very majestuous man standing in front of her:

-General Gia Ðịnh, what do you want of me?

He smiled and answered her with kindness:

Don’t be afraid and stop crying please. General Gia Dinh will be more gentle than a Tay Son one. This residence remains the same for you despite of the change of ownership.

Since his gentleness and his will to conquer the heart of the queen was so strong the latter could not resist. She became thus his first rank concubine and had two sons with him. She was married two times to two kings (Cảnh Thình and Gia Long) and was the last daughter of the Lê kings. That is why the two implacable adversaries became « brothers-in-law » because Nguyễn Huệ was the spouse of Ngọc Hân and Gia Long that of Ngọc Bích. It is also for the latter that a Vietnamese saying goes:

What a bizarre fate she has
Daughter of a king, she got twice married to kings.

In spite of his reputation of being a warrior hardened by years of war and vicissitudes, he was also as vulnerable as any ordinary man. A great number of worries has come upon him that he did not wish to hide and reveal to his confidant, Frenchmen Jean-Baptiste Chaigneau:

Ruling country is easier than managing a harem.
This was revealed by Michel, the son of J.B. Chaigneau in his journal « Le Moniteur de la Flotte » in 1858.

Despite the treaty initialed at Versailles in 1787 by Counts de Vergennes and de Montmorin for king Louis 16th and by his son Nguyễn Phúc Cảnh witnessed by bishop of Adran, Pigneaux de Behaine, the collaboration of a great number of French subordinates in his ranks and his interest in science and Western techniques, he continued adopting a very ambiguous policy toward the Europeans, in particular the missionaries. Was this benevolent attitude due to the friendship he tried to honor toward his friend Pigneaux de Behaine or to his open mindedness like KangXi in China aiming at better utilizing the catholic missionaries’s competences?

One keeps asking these questions up to now. However, one knows that throughout the construction of the Purple City, the maintenance of the mandarinal system, the reform of the Le code based on that of the Qing in China, he appeared to be more than never an admirer of the Ming and Qing dynsties, a convinced Confucianist and a more retrograde emperor. During his last years, he began a policy of folding back by choosing as his successor prince Nguyễn Phúc Ðảm supported by most of the Confucianist mandarins in lieu of the children of prince Cảnh who deceased of an illness. The prince known under the name of Minh Mang did not hesitate to do away with the children and wife of Cảnh (Mỹ Ðường) and gave the Europeans an opportunity, especially the French government to intervene militarily, by deliberately leading an anti-western and anti-catholic policy and thus renewing a policy in line with the Chinese policy. Nguyen Anh could have become a great emperor at the image of a Japanese « Meiji » when he had the advantage of being circled by a great number of Frenchmen including his private physician (a certain Despiaux) and he had an open mind to Western techniques and sciences.

It is a shame for Vietnam to have lost an opportunity to enter the era of modernization.

He does not deserve being forgotten in our history because he arrived at enlarging our territory and unifying the country under his banner. But he is no longer a great emperor of Vietnam because grandeur is measured by not only the enlargement of Vietnam but also by the good deeds he brought to the Vietnamese people and by the magnanimity toward his adversaries.

It is regrettable to say so because Nguyễn Ánh with the qualities he showed us during his 25 years of vicissitude could have done better to his country and people more than any other kings of Vietnam (including king Quang Trung).