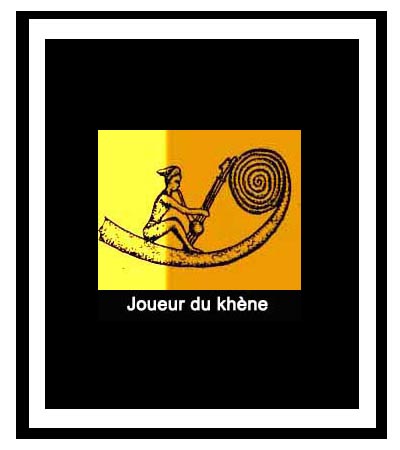 Questions are being asked about the provenance of this mouth organ. Some scientists attribute in Laos its origin country. But others are very reluctant and skeptical. This is the case of  French researcher Noël Péri of French School of the Asian studies (EFEO).

For the latter, if the Vietnamese do not employ this mouth organ in the same form as the Laotian, the music instrument  often found however among certain tribes Mường (cousins of the Vietnamese) or Hmong living in Vietnam,  is identical to that of Laos. In addition, this mouth organ is frequently shown not only on the bronze drums and  situles but also on some Đồng Sơn ustensils. This is the case of the bronze  handle decorated with a male figuration. This one is shown sitting and playing the mouth organ. The music instrument is currently exposed to the history museum of Saigon. It must nevertherless be said with certainty it  dates from the bronze age ( between 3000 and 1200 before J. C. in Southeast Asia ) and it is invented by the Austroasiatics including the Laotian, the Hmong, the Mường, the Thaï, the Vietnamese, the Mnong etc. .. (The Hundred Yue or Bách Việt in Vietnamese).

At a certain time, it is important to remember the Laotian ( Si Ngeou branch or Tây Âu) and the Vietnamese (Lạc Việt branch or Luo Yue) were united together in the foundation of Âu Lạc kingdom of Thục Phán (or An Dương Vương) and engaged  in the fight against the Tsin of Shi Huang Di emperor (or the Chinese). According to French researcher Madeleine Colani, the khene does not exceed the Himalaya and the Brahmapoutre valley of India. But there are exceptions. This is the case of khenes possessed by the Dayaks of Borneo island in Indonesia because before their installation on this island, they were formerly established on the eastern coast of  Indochina. In keeping with the mouth organ of the Austroasiatic, the Chinese have invented the lusheng mentioned in the Che-King ( holy book of poetry) of Confucius.

According to French researcher Victor Goloubew, the  ancestors of the current Vietnamese, the Dongsonian played the khene with a calabash.

The khene is presented in many forms. According to Madeleine Colani, the Laotian type remains the most elegant and elaborated. In general, it is composed of an even number of tubes in bamboo, each fitted with a small hole to play and a free reed ( * ) (brass or silver) fixed at the level of the organ’s wind.

These pipes are assembled in pairs of the same length and in decreasing order of  magnitude from the mouth of the hollowed out  wooden tank and supplied with air by the player breath. The length of the tubes determines the height of the musical  note. When the khene will be more long, its tone will be more low. The number of pipes fixed on the organ’s wind can be variable and linked to the cultural tradition of each ethnic group. For the Hmong people living in the northern mountains of Vietnam or the Mnong of Central Highlands, there are only 6 tubes found in the constitution of this asian syrinx. As for the Thai people in the region Mai Châu (Vietnam), the number of tubes may amount to 14.

Concerning the Laotian khenes, the number of tubes is variable:

-14 tubes with the khène jet

This latter is the most widely used in Laos. In order to produce the sound, the player must hold between his two hands, the wood block where the hole is practiced and having the role of an air pocket. Then he obturates the holes of  tubes with his fingers in the purpose of vibrating the corresponding reeds by expiration or inspiration.

Khene of the Vietnam’s Mnong 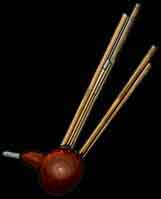 The khene is closely linked to religious rites and important events (fairs, weddings, funerals etc. .. ). It can be played solo or in group to accompany the dance or singing. Each ethnic group has its own legend concerning the khene. Through its music, this helps to bring the world of men closer to that of  spirits. For the Laotian as  some ethnic groups of Vietnam (Hmong, Thai etc … ), the khene symbolizes their cultural identity.

For the Hmong, the possession of a khene testifies to the pride of having the presence of a man of talent and strength in their household. In a Lao saying, to be a true Laotian, it is essential to know how to play the khene, to eat glutinous rice and fermented fish (the padek) and to live in a house on stilts. 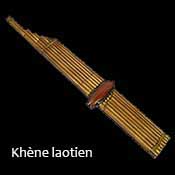 Despite its important role similar to that of the gongs of Highlands in Vietnam (Tây Nguyên), the khene continues to be neglected over the years by the young, because for the mastery of this mouth organ, it must have not only patience but also a musical gift. It is not in the scope of anyone because to be an accomplished player, it must know how to interpret a large number of basic melodies and dancing with the khene.

Some melodies are used to evoke the aspects of nature and life. More than 360 melodies are reserved for the funeral. This proves that the khene occupies an key role in the social and spiritual life of ethnic minorities.