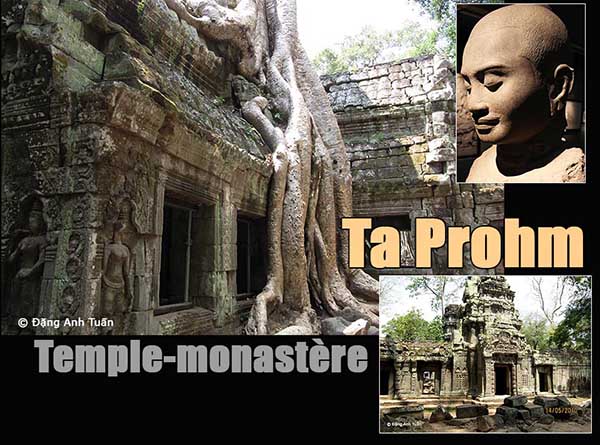 Unlike most of the temples of Angkor, Ta Prohm was left in a state of ruin. It was deliberately chosen by the École française d’Extrême-Orient (French School of Oriental Studies) as an example of what the temples of Angkor looked like at the time of their discovery in the XIXth century. For building this temple, the sovereign Jayavarman VII relied upon the income which the rice culture gave him. The money did not exist at that time. The currency of exchange remained the rice, the basic food of the workers enlisted to build the temple. We find in the Ta Prohm site an inscription indicating that 12 640 people served in this single temple.

It also reports that more than 66 000 farmers produced more than 2 500 tons of rice a year to feed the multitude of priests, dancers and workers in the temple. Because of its romantic attraction, the Ta Prohm temple was selected in the American movie Tomb Raider with Lara Croft (Angela Joli).

It is here that the nature took back her rights. Certain walls of the Ta Prohm site can only stand up thanks to the roots of fig and cheese trees who enclose them as huge octopuses. Ta Prohm is considered as one of the temples the most appreciated in Angkor. It was built by great king builder Jaravarman VII at the end of the XIIth century. It was dedicated to his mother because we find the surprising resemblance of this one in the statue of the main divinity in this temple, Prajnaparamita (Perfection of the wisdom). His father was not either forgotten because Lokeçvara, the main god of Preah Khan looks like him enormously.