Intangible Heritage of Humanity by Unesco in 2005

In the ritual ceremonies, the players of gongs move slowly in single file or in half-circle in front of a public admirer. They left from right to left in the counterclockwise direction to go back in time and return to their origins. Their footsteps are slow and rhymed to the beats of gongs, each of which has a well-defined role in the set. Each gong corresponds exactly to a guitar string, each having a note, a particular tone. Whatever the melody played, there is the active participation of all the gongs in the procession. However, an order very precise in the sequence and composition of beats is imposed in order to respond to the melodies and own themes chosen by each ethnic group.

Sometimes, to better listen to the melody, the auditor has the interest to be into a location equidistant from all the players arranged in a half circle otherwise he cannot listen properly because of the weakness and amplification of the resonance of some gongs corresponding respectively to the distance or the excessive closeness of its geographical position relative to one another.

For most of ethnic groups, the set of gongs is reserved only for men. This is the case of the ethnic group Jarai, Edê, Bahnar, Sedang, Co Hu. By contrast, for the ethnic group Eđê Bih, women are allowed to use the gongs. In a general way, the gongs are of variable size. The disk of the major gongs may vary from 60 to 90 cm in diameter with a cylindrical edge from 8 to 10 cm. This does not allow the players to wear them because they are too heavy.

These gongs are suspended often to the beams in house by the ropes. However, there are the gongs more small whose disk varies from 30 to 40 cm with an edge from 6 to 7cm. The latter are frequently encountered in the festive rituals.

For the identification of highland gongs, the Vietnamese musicologist Trần Văn Khê has the opportunity to enumerate a number of characteristics in one of his articles:

The composition of the played melody is based primarily on the sequence of beats settled according to original processes of repetition and answer.

One doesn’t finds elsewhere as many gongs as one had them on the Highlands of Vietnam. That is why, during his visit in Vietnam, the ethnomusicologist Filipino José Maceda, accompagned by Vietnamese musician Tô Vũ, had the opportunity to emphasize that the highland gongs are very original when he was in contact with the gongs. For him, because of the large number of gongs found, it is possible the Highlands may be the gong cradle in Southeast Asia.

Over the years, the risk of seeing the « original » and « sacred » character is real because of the illicit trafficking of gongs, the lack of gong tuner, the disinterestednessof young people and the destruction of natural environment where the gongs have been « educated ».

For a few years, being regarded as cultural goods, the gongs become the object of all desire for Vietnamese antique dealers and foreign collectors, which brings the local authorities to exercise strict control with the aim of stopping the haemorrhage of gongs (chảy máu cồng chiêng)

The governmental effort is also visible at the local level by the establishment of incentive programs for learning with young people. But according to some Vietnamese ethnomusicologists, this allows to make durable the gongs without giving to the latter the means to possess a soul, a sacred character, a ethnic sound color because they need not only the skillful hand and fine hearing of gong tuner but also the environment. This is the latter factor that one forgets to protect effectively during the last years. Because of the intensive deforestation and galloping industrialisation for the coming years, the ethnic minorities don’t have the opportunity to practice slash and burn agriculture. They will not have any occasion to honor the ritual festivals, their genius and their traditions. They no longer know to express sorrows and joys through the gongs. They don’t know their oral epics (sử thi). Their paddy fields are replaced by coffee and rubber plantations. Their children are no longer forest clearers but they are engaged to industrial and tourist activities, which allows them to have comfortable livelyhoods. Few now recall how to tune these gongs.

The character « sacred » of gongs no longer exists. The latter become instruments of entertainment like other music instruments. They can be used anywhere without significant events and very specific and sacred hours (giờ thiêng). They are played according to the tourism demand. They are no longer what they were until now.

It is for this irreparable loss that UNESCO has not hesitated to underline the urgency in the recognition of space of gong culture in the Central Highlands (Tây Nguyên) as the masterpiece of Oral and Intangible Heritage of Humanity on 25 November 2005. The gongs are only one essential element in the achievement of this masterpiece but it must be understood that other elements are as important as these gongs: the environment, the traditions and customs, the ethnic groups etc. ..

The gongs without their environment and their ethnic sound color no longer possess the sacred soul (hồn thiêng) of Central Highlands.They lose the original character for ever. There is always a price to pay in the preservation of the gong culture in Central Highlands but it is to the scope of our collective efforts and our political will. One cannot refute that the culture of the gongs in Highlands is part now of our cultural heritage. 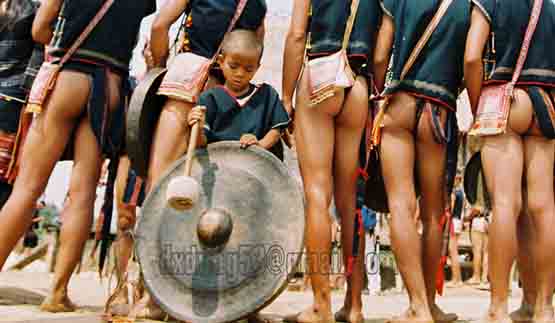