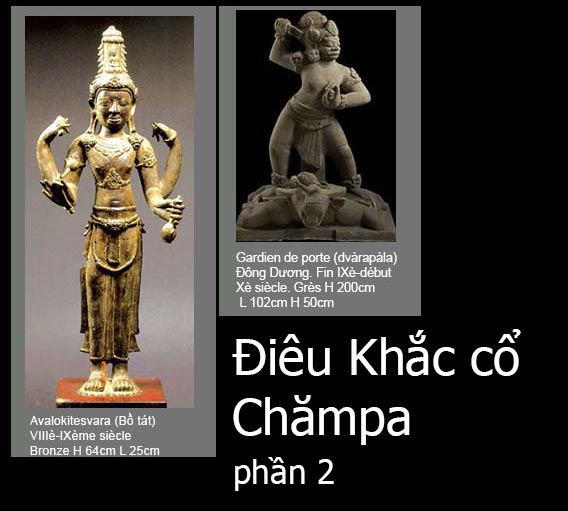 The sculptures of  Mỹ Sơn sanctuary are distinguished not only by the finesse in details but also by the vitality in ornamentation. The amazing and brilliant combination of Cham realistic descriptions and characteristic elements found in the Indian philosophical doctrine (hinduism) has marked the beginning of the golden age of Cham culture.

The divinities head  found at Mỹ Sơn site has the following characters: square face, big eyes, thick lips, large ears with pendants, straight nose, hairstyle in spherical shape with the ringed octogonal vertical element, halo behind the head. It may indicate the Chenla influence (or Cambodia at the pre-Angkorian period ). This is the case of Visnu in a lying position, similar a pre-Angkorian lintel and located in the Mỹ Sơn E 1 pediment.

It is marked by the significant influence of Java. The postural waddle, sensuality and elegance in the sculpture and the halo behind the head give to this style a indisputable subtlety. It seems that only remain the sculptures carved in the temples brick. French researcher Jean Boisselier has pointed out that a lot of bronzes dated back to this period and were imported from Indonesia. This highlights the privileged relationship between Champa and Indonesia. 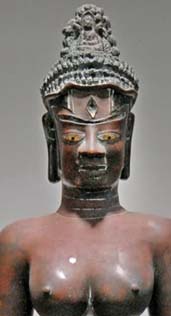 This is the style where the facial appearance is very typical. It is easily recognized by the common features: protruding eyebrowns joined by a continuous and sinous line going back up to the hair, thick lips with the upturned commissures, a moustache that is confused sometimes to upper lip and flat, broad (from face) and aquiline (from profile) nose, narrow front and short chin. The God is identified by his frontal eye. The absence of the smiling face is mentioned. This style corresponds to Indrapura period where Buddhism knew a significant development and became the personal inclination of Indravarman II king. The latter built, in the second half of the 9th century, a Buddhist monastery in Ðồng Dương, located 65 km from Ðà Nẵng city. There is a lot of artworks concerning the Buddhism of the Great Vehicle. It is here that we found an inscription testifying to his simultaneous homage to Laksmindra Lokesvara (another name of Avalokitesvara) (Buddhism) and Shiva Bhadesrava (Shaivism).

This is the sign of the Cham syncretism during this period. A lot of questions arise about the provenance of the Cham Buddhist influence. We long believed and proposed a Chinese influence prior to Liang dynasty via the center of Nanjing in Wanfosi (Chengdu) or in Quingzhou (Shandong). But one could suggest a southern influence coming from the Funan kingdom in Mekong delta. The Ðồng Dương style gives to Buddha statues a condensed aspect of masculinity, vigilant sweetness and well-controlled force. More reading