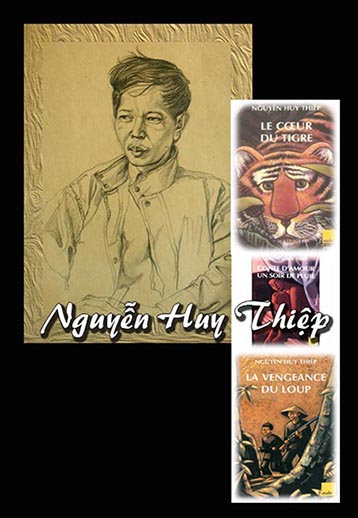 Assigned up until 1986 to the job of drawing illustrations for school manuals in an office of Publishing and Education in Hà-Nội, Nguyễn Huy Thiệp, taking advantage of the openness policy known as Ðỗi Mới ( Renovation ) at the time the Vietnamese communist party held its 6th congress, published in 1987 his first book called  » The breezes of Hứa Tát » printed in  » Literature and Art », the prestigious magazine of the National Association of Writers.

His success was not slow. But it was due mostly to his work entitled « The retirement of a general » when it was published in June 1987. This has provoked not only an earthquake in Vietnamese public opinion but also a hope to see draining in its trail a new generation of young writers without shady deal and having an independent and critical mind that seemed almost non-existent up until then in the Vietnamese literature.

His success was not slow. But it was due mostly to his work entitled  » The retirement of a general » when it was published in June 1987. This has provoked not only an earthquake in Vietnamese public opinion but also a hope to see draining in its trail a new generation of young writers without shady deal and having an independent and critical mind that seemed almost non-existent up until then in the Vietnamese literature.

· A general in retreat (in retirement)
· The heart of the tiger
· The vengeance of the wolf
· Demons live among us.
· Tale of love. A rainy evening
· The gold and fire
· My uncle Hoat
· In our twenties

Thanks to his collection of tales, Nguyễn Huy Thiệp became overnight a shining figure in the Vietnamese literature. His readers including the diaspora find in him not only the talent of a writer but also the boldness to break the taboo and the unspoken kept until then by customs and a system fallen into disuse. At present, he is considered a great Vietnamese writer. With his much sober style, he succeeds in sensitizing easily the reader because he uses metaphors and allusions with his raw language to describe the reality of today in Vietnam, the one with all alienation presently forming the social fabric of the country.

Selecting typical situations and characters in his novels and tales, he makes us uncover with terror all the contradiction of the Vietnamese society, all the unbearable truths, the gangrene of the Bad, the collapse of moral values of a society. He dares to display in public forum the collapse of a system, to scour the social flesh with his black humor and his freezing realism. He succeeds in showing us all the facets of society through his short and bare passages with a talent of a storyteller and that of a writer in total breaking off with the generation of writers compromising with the regime. If he succeeds in building news with an astonishing ease, it is a great deal due to his growing up in the countryside with his mother during his youth, and to his training as a historian when he attended teaching college in 1970 in Hanoi. The work of the Chinese historian Si Ma Qian (Tư Mã Thiên ) has an enormous influence on his tales, especially on his style. He has said one day in 1990 to the French magazine Libération: I don’t think people can write when uprooted. He preferred to stay in Vietnam in order to be able to write his tales, to reveal the true nature of a system and to express the anger and hidden feeling of a human being crushed by years in mud, war and deprivation. Although he has never been in politics, he is always a suspect in the eyes of the Vietnamese authorities because of his liberal words that shake state apparatus. He embodies the symbolic expression of the state of mind of the whole people in search of a stolen and lost treasure.

All those who defended him, in particular the manager of the Văn Nghệ. Review, have been fired. A campaign of denigration in the official media was launched in the past. He was blamed for having published the trilogy to historical argument that attacked national hero Quang Trung through his work « Dignity ». Despite censorship, threats and intimidation, the courageous newspapers continue to publish today his collections. Some of them have already been printed in French at l’Aube publishing house.

The characters in his tales are human beings sexually, morally and socially alienated. They are ordinary people that are thrown, by the ups and downs of life and the system, in perversion, humiliation, abuse, lunacy and profit. In  » There is no king », dirty old man Kiên prefers to eye quietly hairy young women, in particular his daughter-in-law Sinh who because of her 5 children she has to raise, has no means to get remarried, that’s what he said to his son Ðoài when the latter overtly criticized him. It is shocking to see an 80-year old man dying of heart attack in « The Forgotten Land », Panh who tried to fell a tree to contest a challenge and to be able to marry a 14-year old girl that he has known during his passage to Yên Châu. In « The Retirement of a general », his character, retired general Thuận cannot keep his mouth shut when he dares to speak in front of his superiors about the three activities forming the indispensable economic model in the present system: gardening, fish farming and animal husbandry. He expiates a mistake of not knowing how to protect himself. He prefers an honorable death to an ignominious life. He was buried with all military honors. He was a great man. He died for his country during a mission, which was said by general Chương to his son. One sees profit and cronyism growing in all layers of society and new people. Each country has its own customs, said by Mr. Thuyết to his sawing employees in the novel « Sawyers in the long ». Likewise, the daughter-in-law of general Thuâ.n, taking advantage of her physician role, assigned to do abortion and curettage, takes home every night abandoned fetuses in a Thermos flask to cook and feed the pigs and shepherd dogs, which presently constitutes a significant financial resource for a Vietnamese family.

Nguyễn Huy Thiệp continues to angrily munch Vietnam with his tales and stories. Like everyone in Vietnam, he tries to find a solution to his daily needs and above all to give a meaning, a signification to his existence like his character Mr. Quý in his « Nostalgia of the Campaign »: To be intellectual is to be capable of giving a meaning to the life we live. In spite of a bitter heritage, he is at least content of the consolation though his tales and stories.

But for how long ? It is a question no one can give an answer to.

Only the future politics of Vietnam will tell us.