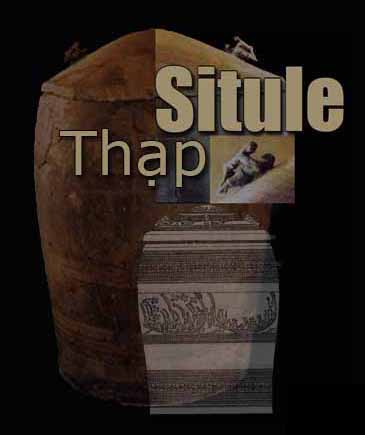 Although the situla (or thạp in Vietnamese ) is considered with the bronze drum as shadow and picture (bóng với hình), it remains still largely unknown to the public for several reasons. First, there is little written on  Dongsonian situla. And then the area dissemination about situlas is very limited. Unlike the bronze drums having been scattered everywhere in Southeast Asia and  South China, the situlas have for the  most part  been found by constrast  in Vietnam. According to Vietnamese mythology, their concentration is located in the basins of  Hồng (or Red River), Mã and Cả rivers delineating the territory of Văn Lang kingdom at the time of Hùng kings. In China, there is a very small number of Dongsonian situlas found coming probably to trade and localized in the border provinces Kouang Si (Quảng Tây), Yunnan (Vân Nam) and Kouang Tong (Quảng Đông). This is also the case of the situla Phong Ðiền (Thừa Thien Huế) that was discovered at the same time as a Dongsonian bronze drum of Heger I, an  object of exchange with the population of contemporary culture of Sa Huỳnh.

The  tiger catches its prey. That is what we have seen on the cover
of the bronze jar in Vạn Thắng sepulture.

But it is also the sole situla discovered in this region Thừa Thiên Huế until 2005. More than a century passed, since the discovery of the first cover of the situla in the bronze drum Ngoc Lũ (1893-1894) until now, on 250 situlas known and inventoried, there are only 15 situlas found in China (9 situlas in the tomb of the second king of Nan Yue, Zhao Mei (Triệu Muội), 1 situla in a grave site in the province KouangTong, 4 situlas in the tomb Luobowan (La Bạc Loan) (Kouang Si) ) and 1 Dongsonian situla in the region of Tianzimiao (district of Cheng-gong, Yunnan). The 235 remaining situlas are localized in the Dongsonian sites so called « pure » in Vietnam and divided into two categories: 205 situlas without lid and 30 situlas with lid. It is only in 1930 that the situla was described in a summary manner for the first time by a Japanese scholar Umeshra Sueji. Then it was evocated by Swedish archaeologist Olov Janse, temporary scientific collaborator of French School of Extreme Orient (EFEO) in 1936 during the archaeological excavations. Finally the situlas belonged to the aristocracy. That is what have been frequently observed during the excavations in the graves belonging until now to noblemen and local warlords. The situla is not an emblem of power but it is a container (ustensil) with multiple uses (tính đa năng). It is used

Generally speaking, the situla which is found in Vietnam in the rich graves has a ritual character among the Luo Yue (or the Dongsonian). For the latter, the situla was considered not only as an indispensable utensil in the daily life but also an object that the deceased could not miss in the other world. The passage of an object used to a funerary object was very frequent among the Dongsonian because it is a notion of sharing between the deceased’s relatives and himself, a tradition which is perpetuated in various forms since the dawn of time in the ancient civilizations, in particular in the Dongsonian civilization.

The situla whose  the shape is cylindrical and   slightly narrowed in the bottom, can have a very fine rim to facilitate, at the neck level, the deposit of a convex cover. It is fitted with two handles in the shape of U reversed with double spirals.  Known for its usual character, the situla is not a work of art very rich in comparison with the bronze drum.

Generally speaking, one finds on the container body, a decor in low relief organized in registers of classical geometric motifs from decoratif Dongsonian repertoire (pointed circles connected by tangents, lozenze friezes or vertical incisions etc …) or a plane decoration very simple. But we may find ourselves with situlas of unparalleled beauty  the decor of which is as sophisticated as that of bronze drums. This is the case of Đào Thịnh (Yên Bái), Vạn Thắng (Phú Thọ), Hợp Minh (Yên Bái ) situlas, each having a cover adorned with a star in its center or filled with human and animal figures in relief,  the arrangement of which  is carried out in the  clock reverse. That is what we have seen with 4 couples in intimate embrace on the Đào Thịnh situla’s cover or 4 fauves seizing prey on the Vạn Thắng situla. By contrast, 4 pelicans are sculpted in relief on the Hợp Minh situla.

By comparing the figurative decoration of pirogue accompanied by men wearing tall feathers on the body of the famous situla Đào Thịnh as that of bronze drums Heger’s type I (Ngọc Lũ, Hoàng Hạ, Cổ Loa, Song Đà (Moulie) … ), one may perceive that products of the same artistic  style are realized by skillful bronzemakers from a same school or rather  from the brilliant civilization of Đồng Sơn since two thousand years ago. For the situlas, it is difficult to establish a classification based on the ornamentation because the latter has carries the symbolic character on most of the situlas.

Some suggest the dimension as a criterion for classification but there is a variety of situlas ranging from their largest size (Hợp Minh, Thiệu Dương, Xuân Lập etc … ) to their smallest miniature ( mingqi or minh khí  in Vietnamese) (situlas found at Châu Can (Hà Nam), Núi Nấp ( Thanh Hoá ) etc … ), which does not allow to have a desired classification. Finally, it is the notion of cover which has been taken into account in the classification of situlas. The richness and sophistication of the decor are visible on all situlas possessing a cover. This is not the case of situlas without cover. Thanks to a slightly protruding ledge found at the level of its collar (gờ miệng), we can identify a situla with lid or not even if the latter has today disappeared.

The situla constitutes not only with the bronze drums, one of the representative elements of Ðồng Sơn culture but also the irrefutable evidence of the Dongsonian local origin in Vietnam. 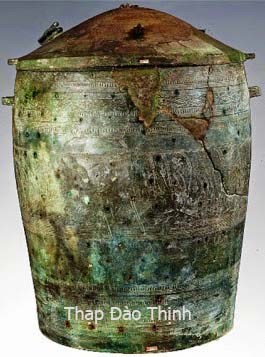 It may be inspired by the wicker-look basket (gùi in Vietnamese) that is still found today among some ethnic minorities of Vietnam because the latter also has the handles to facilitate the fixing of  cords during the movement. For some archaeologists, the situla is well the  basket image that the Dongsonian had the habit of using formerly with the cover because it was initially designed to serve as a receptacle. According to Vietnamese archaeologist Nguyễn Việt, some situlas  exhibited  in particular in the Barbier-Mueller museum in Geneva (Switzerland), attest to the probable influence of skillful bronzemakers of Dian kingdom (Ðiền Quốc) in Yunnan (Vân Nam). It is possible  the culture of Ðồng Sơn  has developed in a context very open and   exchanged each other the information and objects with Dian kingdom by Red River . By taking its source in Yunnan, this river was regarded in the past as the silk road river. But it can nevertheless be stated categorically that the Dongsonian situla is a foreign object to the Chinese tradition and it is the local craftsmanship (or Vietnamese).