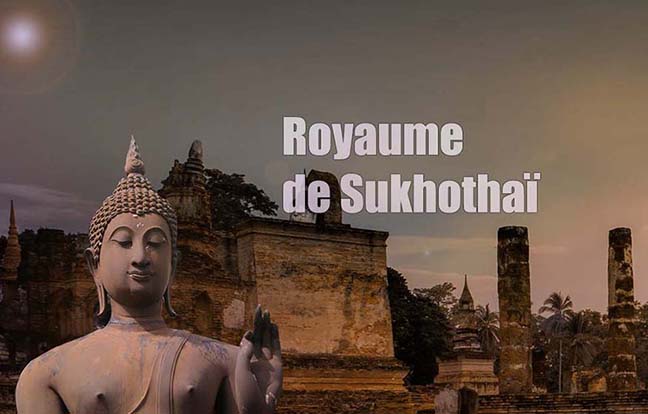 Taking advantage of the exhaustion of Angkorian empire due to ceaseless wars against its neighbors (Champa, Vietnam) and gigantic works in the construction of temples (Bayon, Angkor Thom, Ta Prohm, Angkor Vat etc.) of Jayavarman VII, the death of the latter and the Mongolian invasion against Indochina (Khmer empire in 1283, Champa (between 1283-1285), Ðại Việt (or Vietnam) of the Trần (1257-1288)) and Pagan kingdom (Burma), the Thai began to etablish their political power as well in Thailand as Burma.

In Thailand, on the northern fringe of the Ménam basin, two Thai princes named Po Khun Bangklanghao and Po Khun Phameung managed to free Sukhothai from the influence of the Môn and the Khmers in 1239. Po Khun Bangklanghao thus became the first king of the Thai independent kingdom Sukhothai whose name means « the dawn of the happiness ». But it is rather to his son Rama Khamheng the great task to enlarge the Thai kingdom by conquering not only the northern Malaysia until Ligor (or Nakhon Si Thammarat) but also Khmer possessions in the direction Luang Prabang (Laos). At the same time, in the northern Thailand, after the annexation of Haripunjaya in 1292, another allied Thai prince named Mengrai, founded his kingdom Lannathai (kingdom of the million rice fields) by taking Chiang Mai for capital.

Rama Khamheng and Mengrai, two Thai princes shared the supremacy, the one in the centre and the other in northern Thailand. Other small Thai kingdoms were founded in Phayao and Xiang Dong Xiang Thong (Luang Prabang) in Laos. In Burma, the Pagan kingdom did not manage to resist to the invasion of the Mongols. The Thai of Burma (or Shan) took advantage of this opportunity to dismember the kingdom in several states shan.