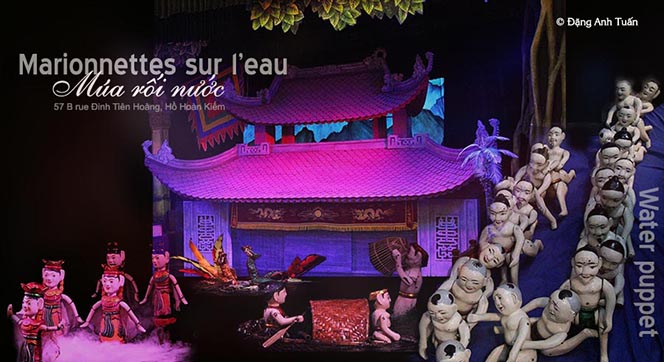 Water is everywhere in Vietnam. Nothing is surprising to find it in  songs, folk dances or performing arts. It has a primordial role in  water puppets show.

Before being a popular entertainment, this spectacle is something as a ritual invocation of good harvests, indispensable facing to the natural disasters that Vietnamese farmers have often in their daily lives. Created in Vietnam in the tenth century, the spectacle of water puppets is over century after century, a performing art where one finds not only mythical characters but also Vietnamese peasants living in their daily lives behind bamboo fences.

Once the red curtain  raised, we can see a troupe of tiny articulated wooden puppets sliding underneath the water. The dragon spit fires, the tortoises are risen abruptly in front of travellers etc… The end of the spectacle is followed by  the artists’ appearance. These individuals all wear a pair of rubber boots and are immersed in waist-high water with stoicism during the spectacle.

The water puppets are the oldest form of expression founded in Vietnam. They belong to the spiritual inheritance of humanity. One finds here the heart of the Vietnamese people. It is a spectacle not to be missed if there is the occasion to visit Hanoï or Saïgon.