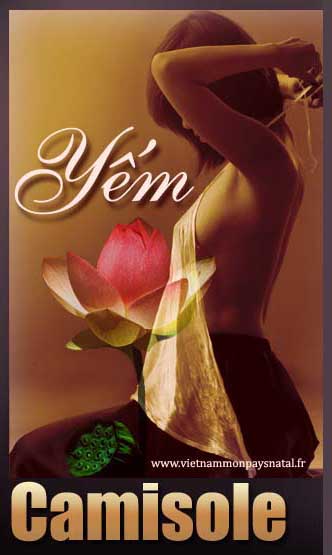 Being an integral element  of four-part dress, Yếm is the most popular bra worn by Vietnamese women in the past. One finds in its manufacture a silk or cotton fabric square, the ends of which  are fixed by the straps tying behind the back and at the neck  level.This is intended to cover and support the chest for leaving  naked the rest of the body’s upper part. Yếm causes not only lure of seduction but also pleasant freshness during summer days. However in winter, it becomes a kind of the underwear above which is added the four-part dress,  thus allowing  Vietnamese women to protect themselves against the severe cold.

In the Vietnamese tradition, the wasp waist is one of the distinctive traits  of female beauty. Perhaps that’s why the birth of this bra is linked to this tradition intended   to emphasize  the line of the women’s body by giving it the shape of the segmented body of the wasp.

This bra  was worn by all sections of the population without exception. But the notion of color differentiates between the categories of people wearing it. The brown colour is intended for  farmers while  educated girls prefer the harmonious, elegant and discrete colors. For the elderly, the dark remains the most widely used. Despite this observation, it is possible to see Yếm with eccentric colours.

One does not known its origin but  Yếm was appeared for the first time in the 11th century under the Lý dynasty. It underwent many changes over time before being again recently an glamourous fashion article, competitor of « Áo dài ». In  old days, it was accompanied by wearing a skirt and a turban cloth (black or brown) or a scarf ending with a « Crow beak » at the  front top. (khăn vuôn mõ quạ). It is only during the reign of  Minh Mạng emperor  that the black pants was  imposed instead of the skirt. 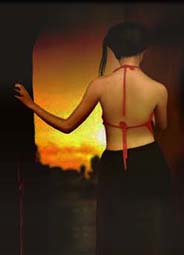 Yếm is an inexhaustible source for Vietnamese poets among which is  famous Hồ Xuân Hương. She has had the opportunity to describe not only the romantic and glamourous image of this Vietnamese undershirt but also the innocence of a young girl living in a society ruled by Confucian immutable ethic, in her poem entitled « the girl asleep in the daytime » (Thiếu nữ ngủ ngày).

Summer breeze is sporadically blowing,
Lying down the young girl slides into sleeping.
Her bamboo comb loosely attached to her hair,
Her pink bra below her waist dropped down fair.
On these two Elysian mounds, the nectar is still remaining,
In that one Fairy rivulet, the current seems to stop flowing.
At such a view, the gentleman hesitated,
Odd to leave, yet inconvenient if he stayed.

Yếm is mentioned so many times in  popular poems. It reflects the strength and intensity of the love through these two following verses:

It’s raining and it made the wind with intensity.
To be covered with a pair of Yếm better than to get thousand duvets

It is difficult to leave the person we fell in love unless we have become this undershirt to retain her. That is what we have in the two verses below:

In the future life, one should not be born a man
But it is necessary to be transformed into undershirt to retain the lover.