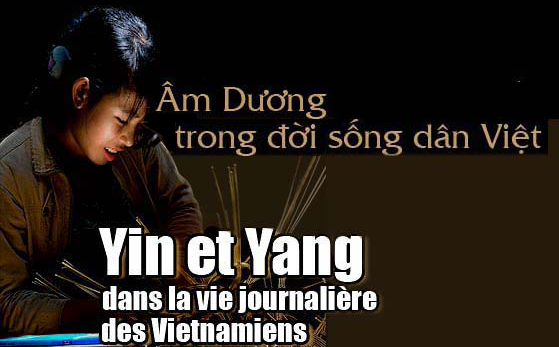 By speaking of the couple circle/square, one wants to evoke the perfection and happy union. That is why one is accustomed to say in Vietnamese: « Mẹ tròn, con vuông » for wishing the mother and her child a good health a the time of birth.  This expression has been bequeathed  by our ancestors with the aim of retaining our attention on the creative character of universe. The roundness and square are two foms taken not only by rice cakes   (Bánh Chưng, Bánh Tết) or married couple cakes (Bánh Su Sê ou Phu Thê) but also  Vietnamese old coins (or  copper cash pieces). The form of this latter is related to the Vietnamese traditional cosmology: their  roundness  evokes that of sky  and the central hole is square as  soil.

For the surface of this old coins, there is always a percentage to be respected: 70%  for the round part and 30% the square part. One  also finds two forms with the bamboo rod  held by the eldest son by walking after the coffin during the funeral  procession of his father.  When the deceased is his mother, he is obliged to walk backwards before the coffin. It is the protocol  « Cha đưa mẹ đón» (Accompagny the father, receive the mother) to be respected in Vietnamese funeral rituals. The rod bamboo represents  the father’s righteousness and endurance. It is replaced by an other plant known under the name  « cây vong » and symbolizing the simplicity,  sweetness and flexibility when the deceased is the mother.  The rod must have the round head  and square leg  for symbolizing the Heaven  and the Earth  while the median part of rod is reserved for children and descendants. That means everyone needs  the protection of the  Heaven and the Earth, the education of parents  and mutual assistance between brothers and sisters in the society. For showing the respect, the number of times which  the invited person is obliged  to  accomplish by bending his back in the state of prostration before the coffin is a Yin number (or an even number)(i.e. 2 or 4) because the deceased is going to the  darker world  of Yin nature  (Âm phủ in Vietnamese). In the past, one had the habit of putting in the deceased mouth a scrap of   gold in order to breathe the mana contained in the precious metal  into him. Being of Yang nature, the gold is able to assume the  body preservation and prevent the putrefaction.  At the time of the  agony of the deceased, his family members must give him a surname (or in Vietnamese tên thụy) which is known only by them with the agreement of home genius because at the anniversary of his death, this surname will be called in order to invite him to participate in offerings and avoid waking others lost souls. That is why one is accustomed to say in Vietnamese  tên cúng cơm for reminding that  everyone has a surname. Likewise, the bunch of flowers offered to funerals must be constituted of an even number of flowers (or Yin number). 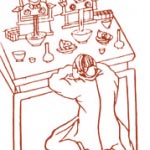 There is an exception to this rule when one is dealing with Buddha or deceased parents. Before the altar of this later, one is accustomed to put 3 incense sticks in the vase or one gets down completely on his knees with  head on ground by repeating an odder number of times (Yang number) because one always consideres them as living beings. Likewise, for showing the respect towards seniors, one only accomplishes one or three times in prostration. However, in  marriage rites, the future wife must bow down before her parents for thanking them from the birth and education received before joining the family of her husband. It is an even number (or Yin number) of times  she will accomplish   (i.e. 2) because she is considered « dead » and does not belong to her original  family. There is a custom for the ceremony of first wedding night. Being supposed to be good, honest,  old enough and having many children, a woman takes charge of spreading  and overlapping of a pair of mats on the nuptial bed:  one of these mats is open, the other upside down in the image of Yin and Yang union. 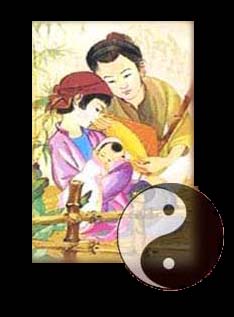 In ancien times, young married men are accustomed to exchange mutually a pinch of earth against a pinch of salt. They would like to honour and  sustain their union and fidelity by taking the  Heaven and  the Earth as the  witnesses of their engagement. One also finds the same signification in the following expression: Gừng cay muối mặn  for reminding young married men   that they should not leave themselves because the life is bitter and painful with ups and downs as ginger and it is intense and deep with feelings as salt.

For speaking of virtue, one is accustomed to say in Vietnamese:

As three squares can be in comparison seven circles, virtuous parents will have rich children.

About 7 circles, one must think of the roundness of « bánh giầy ».  This one  is constituted by a sequence of dots equidistant from the center where there is the heart. This cake is the symbol of  a well-balancel soul that any passion does not bewinder. One finds in this heart the perfection of seven human sentiments: (Thất tình : hỹ, nộ, ái, lạc, sĩ, ố, dục )( Joy, anger, sadness, cheerfullness, love, hatred, desire). Does someone  realize a  ideal moral life if under any circumstances, he succeeds to maintain the loyalty and  righteousness with others and always keeps his equidistant gap in the manifestation of his feelings?

The expression  vuông tròn has  frequently been  employed in a great number of Vietnamese popular sayings:

I pray to God that  everything should go well and I should  eternally keep  my faithful  hearth  with you.

Here is the signification of conjugal love
Despite the eternal separation, one continues to wait  for the  return with patience

My fate is fragile like the dragonfly’s wing
Does the Heaven  knows that this union is durable or not?

During your lifetime (hundred years), when you are concerned by your marriage, you must climb up the river to the source (i. e. you must get informed  in the smallest detail).

This bipolarity Yin and Yang is  visible in various forms in Vietnam. In China, an only genius of marriage is seen, one has  in Vietnam a couple of geniuses, a man and a woman (Ông Tơ Bà Nguyêt). Likewise, in Vietnamese pagodas, one finds on the altar a couple of Buddhas (a man and a woman) (Phât ông Phât Bà) in place of one Buddha. The Vietnamese strongly believe that each of them is associated with a certain number of digits. Before the birth, the embryo needs to wait for 9 months and 10 days. For speaking of someone having  a happy destiny, one says  he as the « good luck » (số đỏ). On the contrary, the  » bad luck (số đen) » is reserved to people having a lamentable destiny. NEXT (Yin and Yang numbers)