Young or old, a scholar (Sĩ) is always well considered in the Vietnamese society. Much regard is given to him as well as the first place in social hierarchy before the farmer (Nông), the craftman ( Công ), and the merchant ( Thương ).

That’s why the latter does not cease to ridicule him in folk songs. 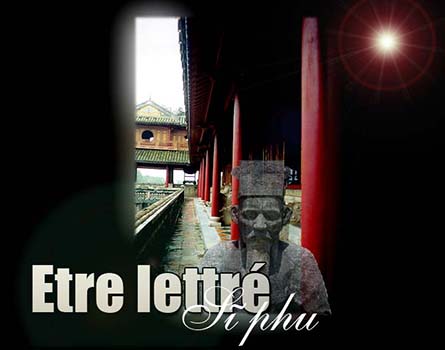 Never marry a student, His long back costs a lot of fabrics

Once full, he just keeps lying down

Equipped with intellectual kowledge, the learned man does not let himself be upset by these remarks and tries to reply with a snicker:

Lying down, here is the luxury hammock
My long back, this is the gown granted by the King
Eat until full, there is plenty of rice in the warehouse
I don’t have to worry, just eat until full, then lie down and rest

This consideration dated back from the time when Confucianism was implemented as the single model structure of the society.

This consideration dated back from the time when Confucianism was implemented as the single model structure of the society. The recruitment of the learned man as a mandarin was essentially based on the literary contests which took place every three years at the great temple of Confucius or the Temple of Literature (Văn Miếu). This temple was built by King Lý Thánh Tôn in 1070 and was changed to The College of the Nation’s Children (Quốc Tự Giám) in 1076. From 1484, the name of the scholar who passed the mandarinal contests was inscribed on a stele including his date of birth and his works. This practice of inscription on the stele was stopped only in 1778. Therefore, the dream of passing the mandarinal contests became an obsession for the majority of the learned men. Some of them passed their tests with an astonishing ease such as Nguyễn Bỉnh Khiêm, Chu văn An and Lê Quí Ðôn. Others failed several times as was the case of the learned man Trân Tế Xương whose poems always convey a caustic irony. His everlasting failure has influenced his works enormously. Besides litterary knowledge, the passing candidate or future mandarin must possess all the concepts of mandate of Heaven, filial piety, loyalty to the king (Nghĩa tôi ) and all the values that provide a cohesion to the confucian vision. Armed with these concepts, the learned man will try to accomplish his mission not only until the end of his days but also to the detriment of his life.

It was the case of the poet laureate Nguyễn Du who prefered retiring to serving the new regime after the fall of the Lê dynasty. It was also the case of the learned man Phan Thanh Giản who decided to take his own life with poison while advising his children to farm the land and not to accept any position during the French occupation of Cochinchina in 1867. As for the learned man Nguyễn Ðình Chiễu, author of the popular poem Lục Vân Tiên and one of the noblest figures of scholars, he never stopped giving moral support to the resistance during the colonial time.

In his Confucian vision, the scholar tried to maintain at any costs and strictly apply these principles unless the king becomes no longer worthy of the obedience owed to him. In this case, the learned man being keen on justice, may overthrow the king because the latter has been dispossessed of the mandate of Heaven. It was the case of Cao Bá Quát who participated in the famous Locust uprising ( Giặc Châu Chấu ) in the name of the Le family against king Tự Ðức, and who was captured and executed by the latter in 1854.

Although the Scholar was one of the cornerstones of a society upon which rested so many Vietnamese dynasties to govern the country and the legitimate defender of moral values particularly the five human relations ( Ngũ Luân ), i.e. between the King and his subordinates, the Father and his son, the Husband and his wife, the Brother and his younger siblings, and the Friend and his friend), which enables us to have a social cohesion and a national identity through centuries, He is however the factor of inertia and cultural isolationism which proved to be mortal for the Nguyễn’s Empire since 1840.

While continuing to underestimate the foreign power and by maintaining his conservatism, the Scholar was incapable of adapting to modernizational reforms advocated by the modernistic learned man Nguyễn Trường Tộ. Thus, He became the major obstacle to reforms that Vietnam needed in facing the ambitions of the foreign powers. This compelled Him to disappear at the same time with the Empire during the French conquest.

The Scholar formed part of a population of 40,000 learned men, approximately 20,000 of whom were holders of ranks in 1880. The last learned man known for his patriotism and reformism was Phan Chu Trinh. This one was in favor of reforms and insisted on the priority of total progress of society, of the diffusion of the modern knowledge on simple political independence.

His banishment to Poulo Condor and especially his death in 1926 has brought an end to the dream of all Vietnamese to find an independent Vietnam with a policy of non-violence and gradual decolonization that he advocated and defended with enthusiasm and conviction for so many years. 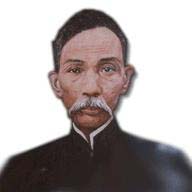 He wants the flame to shed light to the bottom of darkness
Because his heart is burned with anxiety of lighting
But the half-opened door lets in the north wind
In the ending night, with whom to share his tears?

It was the tears of the last great Vietnamese learned man. But it is also a cry of despair of a great

Vietnamese patriot facing the destiny of his country.