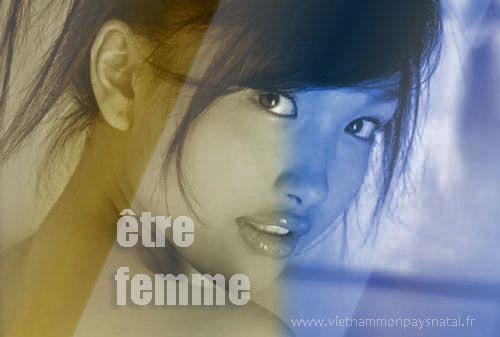 Being woman in Vietnam

Vietnam is a country where Confucianism exerts its considerable influence on political life as well as on society. Becoming a state philosophy under the Han dynasty, Confucianism was employed on several occasions as a single model of the state organization and of the Vietnamese society.

This Confucian influence is not foreign to traditional conditions imposed on the Vietnamese woman. She is subjected to the rule of the following three submissions: Tam Tòng

This rule was reminded in « Family Instructions » (Gia Huấn Ca) by Nguyễn Trãi, the advisor of king Lê Lợi at the beginning of 15th century, and under the Nguyen dynasty. The Gia Long code which was in force in 19th century, was the most retrograde and rigorous that Vietnam has ever known.

The Trưng Trắc Trưng Nhị sisters are heroines as much quoted and venerated as the heroes Quang Trung, Hưng Ðạo Vương Trần Quốc Tuấn etc…They are also the first women who fought side by side with the men in the struggle for independence. The most illustrious case remains the example of Nguyễn Thị Giang. Faithful to the Vietnamese tradition, she committed suicide in 1930 after the execution of her husband, the nationalist leader Nguyễn Thái Học.

The Vietnamese woman is viewed as a perfect model to defend the motherland and national honor. One finds it in the story « Hòn Vọng Phu  » ( Waiting Rock ). It is the story of a woman petrified at the top of a hill, her child in her arms, looking out for the return of her husband who had left for the frontiers in the defense of the country. This model woman is found at several points all over the Vietnamese territory (Cao Bằng, Ninh Hoà etc….)

One also finds this model woman in the story « Thiếu Phụ Nam Xương » (« The Woman of Nam Xương » or  » The Contempt » ). It is the story of a woman who committed suicide because of an erroneous judgment her husband had on her fidelity. A man is allowed to have weaknesses but not a woman. She must be a perfect model. That constitutes for so many years a lot of stirs and discussions. Some women tried to break that Confucian yoke. It was the case of poetess Hồ Xuân Hương who criticized taboos while composing sensual poems at the end of 18th century. She has always been affirmed from the literary point of view as a free woman. Her verses are always filled with erotic evocations.

One finds this vehement dispute by a woman of a Confucian society through the following poem that describes the cake Bánh Trôi Nước ( a white and round cake, having a sweetened core, immersed in a caramelized juice ) :

My body is white, my shape is round,
I float and sink with water and mound.
My contour depends on the hand that kneads
But I always keep my heart pure and sound.

Hồ Xuân Hương referred to a woman who at that time, in spite of her tainted body and difficulties of life, continued to keep her heart pure and faithful. She was also the only one who dared approach her rights as a woman and talk shamelessly about carnal love. She succeeded in not being censored through her unequaled skill by proceeding with allusions and metaphors. To talk about eroticism, she used a soothing description of landscape and objects, things the most believed in a feudal society.

There was even an anecdote about her told by the poet Xuân Diệu himself:

It rained one day. The road became slippery. Hồ Xuân Hương fell suddenly. She spread herself all out on her body, her arms raised behind her head, her legs pulled apart. The boys laughed. She improvised a distich immediately:

I raise my arm to measure the vastness of the sky
I pull my legs apart to have that of the ground.

It was also the case of the favorite Ỷ Lan of king Lý Thánh Tôn. She took advantage of the campaign conducted by her husband against Champa to assure a brilliant regency. She undertook at that time many social measures to help the poor and women in particular. Only in 1907 for the first time were classes opened for girls in a private school. The feminist movement started to be launched.

Nowadays when the law recognizes equality of the sexes in all economic, political and social domains, there exists in fact this inequality. It is no longer a question of legality but a question of mentality. It continues to be omnipresent especially in rural environment.