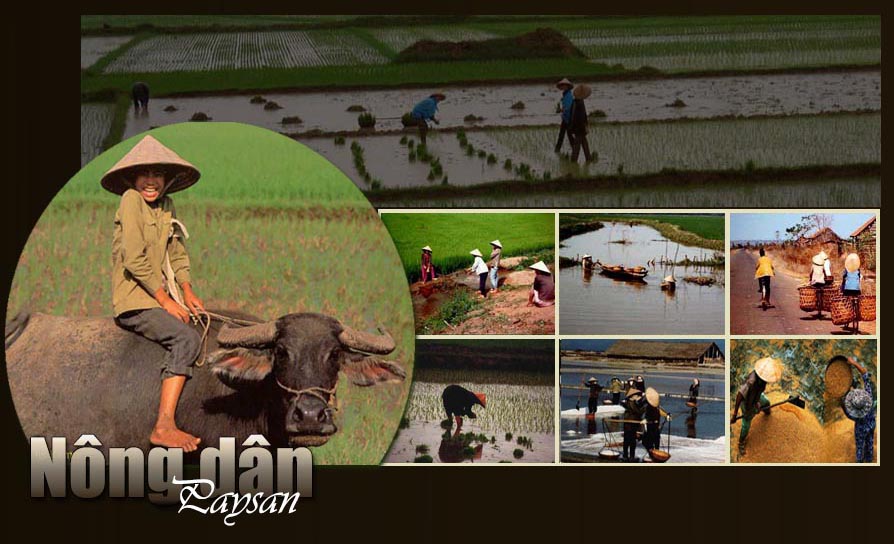 As Vietnam is a country where Confucianism exerts considerable influence on society, the Vietnamese peasant always takes the second rank on the social scale compared to a scholar. Even in the majority of folk songs, an undeniable preference is noted for the learned men. The dream of having a learned man as husband is always an obsession for a Vietnamese girl in the old days.

I neither need immense rice fields nor whole ponds
I only like the scholar’s brush and his ink stone.

However, thank to the farmer’s labor and sweat, Vietnam has currently become the third largest rice exporter after the United States and Thailand. Also thanks to his sacrifice, Vietnam territory has grown from Lạng Sơn to the Point of Cà Mau.

It is the farmer that took possession from 16th century, of the territory filled with water and sunshine that is our Cochinchina during the Descent toward the South. It is also him that took up arms to defend the motherland when invaded. That is why he is often called peasant-soldier. It is also him that first revolted against the aristocracy and gave the brothers Tay Son the opportunity to grasp the power in 1770 in central Vietnam.

It is also him that works the landscape of the two deltas with no cultivable piece of land is left unexploited. Everyday in the fields of these deltas are seen male and female peasants leaning under their conical hats, feet and hands in the clay, continuing to pull out rice seedlings from nursery beds or replant them in the paddy. His existence is a continual struggle. He loves his land more, and his precious cereal gives him so much anxiety and annoyance. He never stops resisting bravely the forces of nature: drought, flood, typhoon etc… He is always obsessed with overcoming the water. To work the soil, to thwart calamities, to prevent food shortage.

That supposes his perfect mastering of hydraulic art: dike building, canal digging, breach filling, rampart elevating etc. It is the water that shapes his thick identity. He becomes more patient, more obstinate, more hard working and more methodical. For him, work is a supreme virtue, a value in itself. In the North, the peasant is poorer. He dresses in a more austere way and behaves with more reserve. Even on his face, the cheeks are more protrude, the features are marked. In the South, the peasant is more open, less reserved, craftier, and more outgoing. In spite of these differences, there is one thing in common between the peasant of the North and that of the South: realism.

The down-to-earth overrides sentimentality. His sharp observation of reality gives rise to an often wild humor towards other classes, in particular monks, sorcerers, quacks, aristocrats, etc. This humor is found in Ca Dao ( or proverbs ).

The geomancer, the fortune teller, the soothsayer,
Listening to them and you will lose your shirt.

Also in folk songs are found his joy of life, his simplicity, his righteousness, his economy. It is in these watery checkerboards filled with mud, and meticulously and economically gardened that appears the centennial rooting of the peasant tied to his labor, which makes him a diligent and obstinate combatant.

For a Vietnamese peasant, his field, his soil are symbolized by this constant mixture of land and water. It is still by these words đất nước that he indicates his motherland. His attachment to this land is so deep that one can say only in one sentence:

His destiny is that of Vietnam.