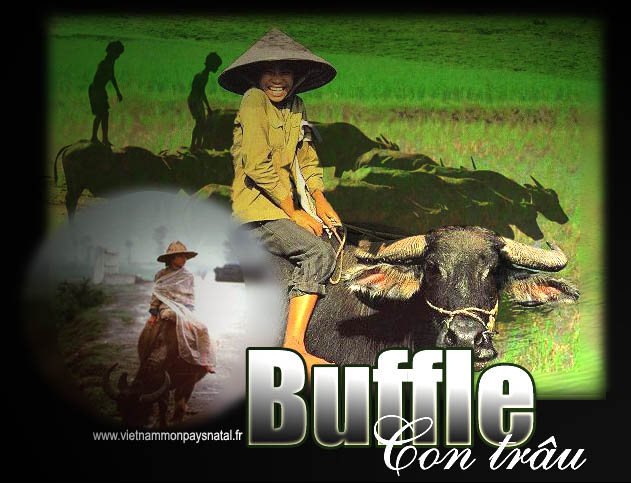 As Vietnam is an agricultural country, the buffalo is always regarded as a familiar animal for the Vietnamese people, in particular the peasants. The image of the buffalo is closely tied to the rural landscape of Vietnam. Like many other countries in the world, Vietnam has legends among which there is one concerning the buffalo.

Once upon a time, to help the Vietnamese peasants, God was assigned an angel to descend in Viet-Nam with two bags, one filled with cereal seeds to feed people and the other with grass seeds for the cattle. The angel was advised to sow the cereals seeds first, and grass seeds next. Being so absent minded, he forgot the recommendation by doing the opposite: grass seeds first, and cereal seeds next. That is why Viet-Nam was covered with so much grass and forests that the peasants had to make a complaint which echoed to Heaven. Furious, God condemned the angel to exile by turning him into a buffalo and sent him to Viet-Nam. That is why the buffalo was compelled to spend all day long munching grass and pulling the plough to pay for his errors.

The buffalo is a very useful animal in agricultural countries, in particular Vietnam where farming technologies are not very developed. In certain countries, if the dog is the best friend of man, then in Vietnam the buffalo is an inseparable companion of the farmer. Without this animal, the latter will be deprived of everything because it is the buffalo that helps the peasant to till the land everyday, to cart the burdens, to replace him in tiring and ungrateful tasks. This ruminant is also the animal that mountain and highland dwellers sacrifice when it comes to asking God for blessing harvest.

The buffalo is the Vietnamese peasants’ benefactor. This is why it is generally quoted in folk songs and proverbs. It is one of enriching subjects in the Vietnamese poetry. For the peasant, the buffalo forms part of his heritage. That is why the saying:

indicates a well to do person in the village.

Purchasing a buffalo, looking for a wife, and building a home
Among these three jobs, none of them seems to be easy.

As it is the case of fish farming, the breeding of buffaloes is a mean to get rich quick. That is why it is customary to quote in folk songs the following words:

In short, one finds through the image of the buffalo most of the image of Viet-Nam, our country. For the overseas Vietnamese, to find the buffalo is to find Vietnam. This animal, along with the bamboo, is one of the representative symbols of Viet-Nam. The buffalo reflects at the same time the tender way of life and the unshakable resistance of the Vietnamese people.