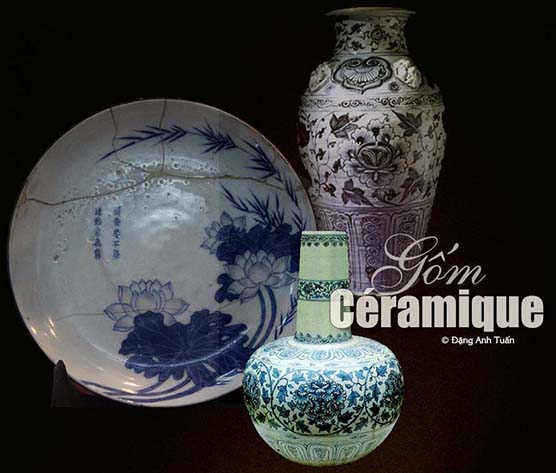 It is greatly surprising to see that, despite the everlasting domination of China on Viet-Nam, the latter was able to distinguish brilliantly starting from 14th century in the domain of ceramics. It became thus an active participant in the flourishing trade of South-East Asia in this domain with its junks and its compass known since 11th century. Tome Pires in his Suma Oriental (1515) summarized all these exchanges and foot-noted even the existence of a Vietnamese ceramic production intended for sale in China. At that time, there was even the counterfeit of Vietnamese blue and white in the Chinese furnaces of Snatow.

Its success was mainly due to the cobalt blue that blew into Vietnamese ceramic art a spirit which will have lasted for two centuries and enabled it to capture a foreign market as far as even the most remote corners of Asia.

It is the case of large a vase-bottle found at the Topkapi palace of Istanbul, carrying an inscription in Chinese characters, in blue under glaze that one can read in Vietnamese: Painted for pleasure by Pei de Nam Sách in the 8th year of Thái Hoà, or of a dish with blue and white floral decoration at the Treasury of Ardebil (Museum of Teheran)

If the cobalt blue was known in Vietnam for a long time even before the Chinese invasion of Ming, it appears that it was used only around the years 1430-1450. It is from this time that the blue and white definitively replace monochromic ceramics.

It is thanks to the perfect control of manufacturing, decorating and baking techniques that the Vietnamese potter can improve his imagination. Even though constraints of painting under glaze do not prevent any repentance, there appear on the sandstone not only more and more sophisticated drawings but also a variety of pigments, an eruption of form s and original decorations, which made him an artist. If he does borrow a good number of decorative drawings from China ( peonies, lotus, flowers, foliated scrolls etc..), he has on the other hand the idea to create an autonomous style which is less hieratic and more vivacious than his Chinese homologous by the liveliness of his feature and his spontaneity. He can adapt these decorative elements to the Vietnamese style: the Chinese red fish becomes thus the Cá Bông, a Vietnamese freshwater fish.

It is no longer the case of China since China discovers the perspective starting from the reign of Jiajing (1522-1566). On the other hand, the quality of the central motif found on the plates, is definitely higher than that of the surrounding ones. This proves there is an intervention of several craftsmen in the realization of these plates. Because of the war, Viêt-Nam did not set up a systematic program of archaeological excavations. Few sites were exhumed so far. On the other hand one knows that the areas of Tam Tố north of Thanh Hoá, Nam Sách in the province of Hải Dương, Bát Tràng north of Hanoi to name a few sites, are surely witnesses of the manufacture of these Vietnamese ceramic pieces.