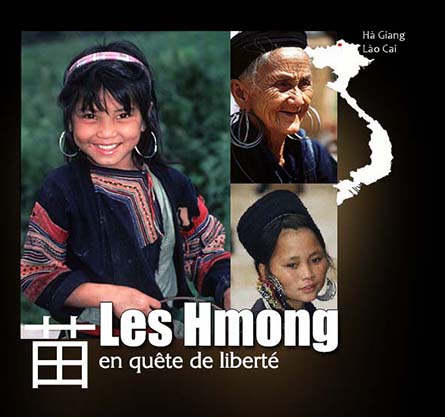 The Hmong (The Miao or Miêu in vietnamese) actually  living in Vietnam are  descendants of emigrants from South China. Around the end of 18th century and the beginning of 19th century, the Hmong emigrated to Indochina peninsula (Laos, Vietnam and Thaïland)  and settled  away from plains already occupied by  majority ethnic group  in mountainous areas of Hà Giang and Lào Cai provinces.

Their migration story was closely related to the insubordination to the Chinese culture and the policy of asssimilation practiced by northerners. According to mythic tales passed down from generation to generation, their ancestors lived in snow and  ice covered regions where the night lasted almost 6 months. That is why, being accustomed to living in tropical regions and not having the opportunity to see the snow, the Hmong use terms such as « nước cứng » (or solid water) and « cát trắng mịnh » (or fine white sand) to designate respectively the ice and the snow. According to historians, their origin would be in Siberia (Tây Bá Lợi Á) and in vast plateaus of Mongolia. Some Caucasian proeminent traits are detected among the Hmong today. Others preferably opt for Tibet because shamanic rituals.  One has speculations more than certainties about the accuracy of the Hmong geographic origin. In the Chinese writings, the Hmong were designated under the Miao name including initially all the  ethnic peoples non han living in South West China. Today,  this name is reserved to the population group specifically identified and distinct gathering together the Hmong living in Indochina peninsula and  the Miao ethnic minority populations  (The Hmong, the Hmou, the Qoxiong and the Hmau)  closely related at the linguistic and cultural level in China.

Originally related to the drawing of  rice field (Điền) above which is added the pictogram Thảo” (cỏ) (herb)(key 140), the Chinese character Miao (or Miêu in vietnamese) clearly shows the way that the Chinese adopt  to call  the people knowing  the rice cultivation with their language. Being initially rice farmers, the Miao  had  the sedentary lifestyle in plains. As the Miao were chased by successive waves of the Chinese who dispossessed them of their  arable land and their rice field, they were forced to become highlanders  and stayed until today. Being rushed to high altitudes in inaccessible and hostile mountain areas, they were forced to adapt themselves to each environment where they looked  for an agricultural model allowing them to practice the rice cultivation (rice terraces). In spite of that, the Chinese had the habit of traiting them as the barbarians. The Chinese have gone as far as making a distinction between the shu Miao ( or the  cooked Hmong) and the sheng Miao (the uncooked Hmong), that means the assimilated  Hmong  and the  diehard Hmong  on the margins of Chinese civilization.  They  had the task of transforming these sheng Miao into shu Miao.  Myths and facts are not miss to enrich the history of the Miao (or the Hmong).  The latter is punctuated by endless conflicts with the Chinese since time immemorial. This long history of resistance to oppression gives them a particular reputation: they cannot be assimilated and very belligerent.

A people in search of freedom

The Miao ( or the Hmong ) lived together with Hsia(1) tribes since prehistoric times in the middle of Yellow River  Basin (Honan or Hà Nam in vietnamese).  Being associated with Chi You ( Suy Vưu ), they engaged the first confrontation leading to failure with the death of the latter at Zhuolu (Trác Lộc) in Heibei province (Hồ Bắc) (approximatively 2690 before J.C.).They were  henceforth  repelled by Yellow emperor Huang Yuan (Hiên Viên) and Yu the Great (Ðại Vũ) in the Bai Yue territory at  the Yang Tsé Basin River. Other conflicts were evoked with Miao groups in Chinese historical writings  of Shan and Zhou dynasties (1121 – 256 before J.C.). In the middle course of Yang Tsé River (Dương Tữ Giang), they exercised  significant influence over the political and social life of the Chu kingdom (Sỡ Quốc). The latter was considered as one of three principalities fighting among themselves for supremacy  during the Warring States period (Thời Chiến Quốc).  In addition to the soul recalling, we noted the close ties between the  Chu culture and the Miao on the various cultural  traits (lifestyle, habitat, language etc…)(2). They constituted probably the force majeure in the Chu population with the Luo Yue (the Proto-Vietnamese) and the ancestors of Thaï today (The Si Ngeou or Tây Âu).  This force majeure became the first bulwark of Yue and Miao tribes in the committed fight against the Chinese. 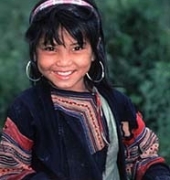 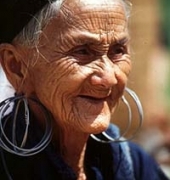 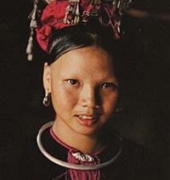 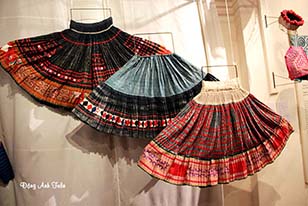 Being in hemp, silk or cotton, the  Hmong pleated skirt whose decoration is own to every group, requires more than 20 meters for the length of the fabric. The method of pleating is one of the characteristics of Hmong women skirt.

After the disappearance of this kingdom, the Miao continuated to be repelled in Guizhou (Quí Châu), Sichuan and Yunnan mountains.  Other military conflicts had emerged with Miao groups in the era of the first dynasty of the Han (140 – 87  before  J.C.) and during Five Dynasties (140 – 87 before  J.C.).  The Miao name was forgotten temporarily in Chinese writings until the establishment of Chinese suzerainty on these provinces by the Yuan ( or the Mongols of China). Then it was regularly mentionned again under the Ming dynasty. Because the Chinese strong demographic growth  ( from 100 millions to 450 millions between  13th and 18th centuries), the Chinese of the Ming dynasty continued to deprive the Hmong of their plateaus and their rice fields, which caused simultaneously the exodus and the fight engaged by the Hmong in the defense of their land. Some Hmong took up arms.  Other preferred to seek refuge in Indochina pensula, in particular in Vietnam by three  successive waves of which the most important was maked by  the  Taiping mystical insurrection   known under the name of Tai Ping Tian Guo (Thái Bình Thiên Quốc)  against the Qing  (from  1840 to 1868). The Hmong thus became a minority ethnic group of Vietnam since three centuries.