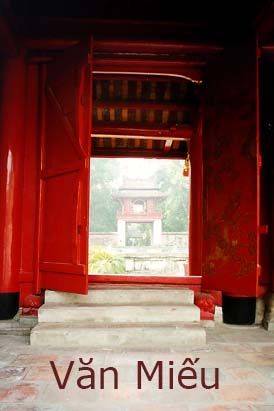 Vietnamese society is profoundly influenced by Confucianism that was introduced to Vietnam in the era of a long Chinese domination (111 B.C. – 939 A.D.). Therefore Vietnamese people have absorbed more or less the concepts prescribed by the wise Confucius in « The Canonical Book« . Must be done what appears on a moral viewpoint just and appropriate taking into account the Five Relations ( Ngũ Luân ) upon which rests the Vietnamese society: relation between the king and subjects, father and son, husband and wife, elder and younger brothers, friend and friend.

Thanks to this doctrine, a Vietnamese bestows great importance to his family that he always considers as a moral training ground and strongly attaches himself to the forces of the land and his ancestors.

This allows the Vietnamese society to find not only a cohesion but also a consolidation, deep roots and an efficiency to overcome foreign powers in the most difficult and crucial moments of the history of Vietnam. Society is considered on a large scale by Vietnamese as an extension of the family circle. A confucianist Vietnamese never neglects his filial piety, respect of elderly people, ideal of loyalty, friendship and honor.

In order to understand the Vietnamese soul, gentleness should be taken. Generally speaking, a Vietnamese is stripped of his aggressiveness except when someone makes him lose face, in particular his honor. Forgiveness is something very Vietnamese. Those are quintessential traits of the Vietnamese people depicted by the Vietnamese Bob Dylan Trịnh Công Sơn. Honor is one of the qualities a confucianist Vietnamese tries to conserve until the end of his life. The jade that melts can conserve its whiteness, the consumed bamboo still keeps its stem straight. Individual existence is very light compared to that of honor. Those are the sentences that sum up the state of mind of the confucianist Vietnamese.

It is the case of general Võ Tánh who, despite the recommendations of his brother-in-law Gia Long to flee, preferred to take sacrifice in 1801 by jumping in a building full of gun powder to defend not only is honor but also the lives of his soldiers facing the powerfully equipped Tây Sơn army immobilized because of the siege at Qui Nhơn, which allowed emperor Gia Long to claim at Phú Xuân (Huế) a thunderous and decisive victory. But the one who illustrated well the confucianist Vietnamese remains the hero Trần Hưng Ðạo. One finds in this general all the qualities of a man of ren (ren includes all virtues prescribed by Confucius in the Canonical Book.

His father, Trần Liễu was the brother of King Trần Thái Tôn. The latter had no children. To consolidate and perpetuate the dynasty, the prime minister Trần Thủ Ðộ did not hesitate to force the Princess Thuận Thiên, the concubine of Trần Hung Ðạo’s father, pregnant for three months, to marry the King. Outraged, his father Trần Liễu told him at the time of agony:

If you couldn’t avenge this offense and to take the throne, I wouldn’t never happy in the land of Sources.

It challenged not the words but never took into account the recommendations of his father. However, one day, to determine the intentions of his children, he asked again their opinion about it. His younger son encouraged him to usurp the throne. He prohibited his son from seeing him until the end of his life after failing to kill this latter on the field. Very pious, he learned that his father had told him, but he tried to leave aside the personal interests to act in accordance with the interests of the nation.

His loyalty toward the king was without failure . On a beautiful day, during an excursion with the king in a jonc, having in his hand a baton whose end bore a sharp piece of metal, he did not hesitate to take it off to show the king his loyalty. It was he who reassured the king to continue the struggle against the Mongols and not to surrender by telling him: « If you want to surrender, you must first behead me« . Thanks to his courage, determination, tenacity and magnanimity, Vietnam succeeded in getting out victor two times in a row against the Mongolian army of Kubilai Khan in 1257 and 1267.

He never took advantage of his military command to grant favor to anybody. He left it to the king to take care of when he was commander in chief of the Vietnamese army. He exerted his power with equal fairness on everyone, big or small. He is perfectly close to the man of ren. It is also thanks to him that Confucianism at his time reached its highest point and thus became the sole model of organization of state and of the Vietnamese society.

In spite of that, Confucianism is blamed for keeping the people in particular women in permanent status of submissiveness and for being one of the causing factors of inertia that works largely to the advantage of the leading class and stifles enterprise spirit and any reforms needed for progress, which provoked at the beginning of 20th century serious and catastrophic consequences for Vietnam with the fall of the Nguyễn empire followed by regrettable events during the last decades.

It is not surprising to see that a man coming from this Confucian society, in particular the Vietnamese intelligentsia of today is confronted often with an insurmountable dilemma. He is always pulled between social progress and moral values of Confucianism which continues to exert a noticeable influence on his heart and mind at the moment when Vietnamese society needs reforms to be able to better adapt with economic and social mutations that are necessary for Vietnam after so many years of war. It is difficult to know today in what way socialism erected on the dogma of state, has really played a role in the current social transformation. But it is also impossible to evaluate the degree of influence of Confucianism at this time.

Today, it is up to us, as Vietnamese to find the right way and to behave with dignity so that we are not ashamed of being the « Children and Nephews of the Dragon and the Immortal », in particular those who live abroad.