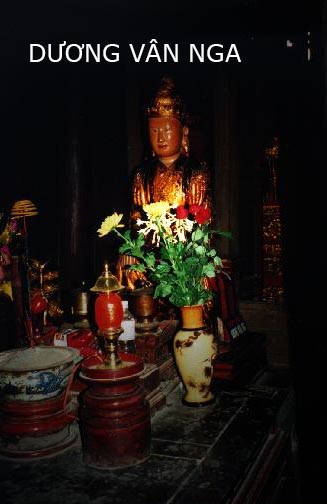 One speaks rarely of Dương Vân Nga in the history of Vietnam. Her name is not as often cited as that of the sisters Trưng Trắc Trưng Nhị or that of Triệu Ẩu. However she was an outstanding woman, the great queen of the first two dynasties Ðinh and Tiền Lê ( anterior Lê ) of Vietnam. Her life and works can be summed up in the following four verses which have been transmitted by oral tradition to our days and left on the wall of Am Tien monastery by a mysterious monk exactly 1000 years now, at his encounter with Dương Vân Nga:

On her two shoulders two kings were carried
Queen of two reigns, she retired in Am Tien monastery.
Accompanying her spouse, she had beaten the Song and pacified the Cham
Service she rendered to her country, yet bad luck she got in her life.

Among the ten queens of these two dynasties, she was the only one to be allowed a statue bearing her effigy. During its restoration and transfer in the temple dedicated to King Lê Ðại Hành at the beginning of the Hậu Lê dynasty the statue oozed strangely, perhaps due to it being exposed suddenly to the sun after having been put in a humid place. At that time, it was said that this phenomenon was attributed to atrocious sufferings life has reserved to Dương Vân Nga during her lifetime.

Her real name was Dương Thị. Vân Nga was the name attributed to her by combining the first word of the name of the region of her father Vân Long and that of her mother Nga Mỹ. She was issue of a very poor background. At her very young age she had to collect wood in the forest and fish in the river to provide to the subsistence of her family in a mountainous and uneven region which is our Hoa Lư. Early morning in the forest, late evening in the river, she became without delay a young hard working, energetic and trouble shooting girl.

She had an innate sense of organization that allowed her to become in the following years the leader of a band of young girls in the area. She arrived at coping with a rival band constituted mainly of young boys led by the buffalo tender Ðinh Bộ Lĩnh by completely disperse his herd of buffaloes by using firecrackers and by her perfect mastery of round floating baskets that helped rapid transport of her troops across swamps and streams. But Ðinh Bộ Linh finally had the last word thanks to his scheme of recourse to poles and light craft of bamboo mat to pierce and immobilize all the round floating baskets of Dương Vân Nga. From then on Ðinh Bộ Lĩnh not only conquered Duong Van Nga’s admiration but also her love. That is why nowadays to evoke conjugal union and predestined love of a couple, it is often referred to the following popular expression: Bamboo mat craft crush round floating baskets ( Thuyền tre đè thuyền thúng ) 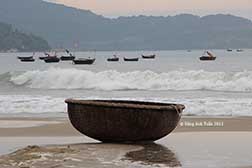 Thanks to their association, they arrived at gathering under their banner all the young of Hoa Lu and eliminating without delay their opponents in the conquest of power. Thus Ðinh Bộ Lĩnh became the first king of the Ðinh dynasty often known as Ðinh Tiên Hoàng. He was very authoritarian. He used ranks and appointments to buy loyalty of his subordinates. He also used force and cruel and unimaginable punishments to punish his adversaries and those who dared criticize him.

Despite Dương Vân Nga’s advice, he remained unruffled and made several enemies to himself even in his family. Instead of appointing his eldest son Ðinh Liễn, the one who had helped him for several years in his fights for the unification of the country, he chose his youngest son Ðinh Hạng Lang as his crown prince. This provoked Ðinh Liễn’s jealousy and incited him to assassinate his younger brother. Dương Vân Nga was at first witness of the fratricidal fight among her children, then the death of her husband, king Ðinh Tiên Hoàng assassinated by Ðỗ Thích a crank who, after a dream, thought the kingdom should belong to him and the eldest son Ðinh Liễn killed by the rebel troops.

She soon had the pains and sufferings of her daughter, princess Phật Kim, deserted by her husband Ngô Nhật Khánh who, being one of the sons of Ngô Quyền, took refuge in Champa and requested this country to launch a maritime attack against his own land Vietnam in the goal of reconquest of power. Because of the age of her son Ðinh Toàn ( 6 years old ), she had to assume the regency with Lê Hoàn, a generalissimo, head of Vietnamese territories.

But she soon faced the armed resistance of her assassinated husband’s partisans who wanted to eliminate Lê Hoàn at any cost and also the imminent threat of the Song as well as Champa’s. She was placed in front of a dilemma that appeared to be difficult for a woman to overcome alone when she lived in a Confucian era and when Vietnam was just liberated from Chinese domination for about a dozen years. She had the courage to take a decision which appeared doubtful at that time and heavy of harmful consequences for the Dinh dynasty in yielding the throne to Le Hoan and associating with the latter in managing the Ðại Cồ Việt ( ancient Vietnam ).

This permitted Lê Hoàn to have a massive adhesion of a great part of population and restore not only the confidence but also the unity of the whole people. He thus succeeded in putting down the rebellion, wiping out the Song on the Bạch Ðằng river, starting the Nam Tiến movement ( or descent toward the South ) and restoring peace all over the country. One should place oneself in this troubling political context that Dương Vân Nga experienced in order to see that it was an act well thought out and courageous from the part of a woman who, trained up until then to be submissive to a Confucian yoke, dared accept the dishonor and scorn to assure that our country would not pass under Chinese domination and that Vietnam would not prolong in political chaos.

Her combat appeared to be more arduous than that of the Trưng Trắc Trưng Nhị sisters because it is the matter of not only a struggle against the invaders, but also her own interests, her personal sentiments for the love of this country.
During the reign of Lê Ðại Hành ( or Lê Hoàn ), she ceaselessly advised the latter to practice a politics of magnanimity towards his adversaries, to ban cruel punishments established by Ðinh Tiên Hoàng and to call on talented monks ( Khuông Việt, Ngô Chấn Lưu, Hồng Hiến, Vạn Hạnh ) to the management of the country. Being a warrior by nature, bearing the name of Great Expedition ( Ðại Hành ), he continued to enlarge Vietnam by leading not only a maritime expedition that destroyed the Cham capital Indrapura in presently Central Vietnam in 982 and killed the Cham king Bề Mi Thuế ( Paramec Varavarman ) but also a politics of pacification all over the place in the ethnic minority territories. It was in one of these battles that the last son of Dương Vân Nga and Ðinh Tiên Hoàng, Ðinh Toàn, died assassinated at the place of Lê Hoàn by the Mán. This death was followed by the suicide of her daughter, princess Phật Kim and the death by illness of her son Long Thâu that she had with Lê Ðại Hành. She was taken up by the disappearance of her entourage without complain. She preferred to live her last days in Am Tiên monastery and burry the personal sufferings of a woman facing her destiny.

Is it fair for a patriotic woman like Dương Vân Nga overwhelmed by destiny, not to be cheered and cited like the Trưng Trắc Trưng Nhị sisters in the history of our Vietnam? Is there anything to do with a deliberate omission because of a sacrilege committed by Dương Vân Nga for having married and served two kings in a feudal Confucian society which is ours? One cannot erase the truth of history especially these details, said the Chinese historian Si Ma Qian.

It is time to give back to Dương Vân Nga her notoriety and her place she deserved long time ago in our history pages and make known to future generations the courageous and full of wisdom decision. This one, even though it seemed doubtful and immoral for a Confucian society, was made in the moment where the situation exacted more than ever the cohesion and unity of the whole people facing foreign invasion, but also a man of valor and talent that was our great king Lê Ðại Hành. Without him, the Nam Tiến movement would not have taken place.