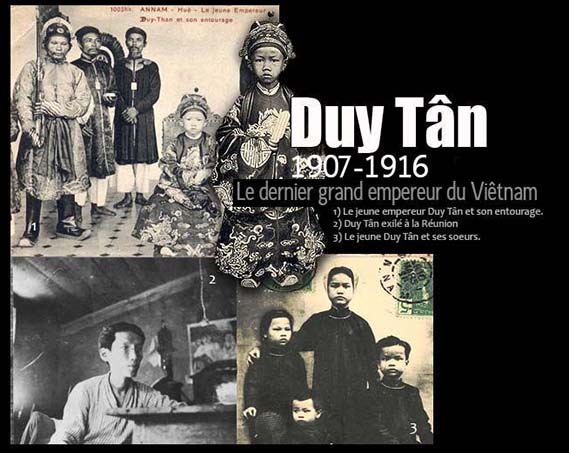 A great homage to the man who has dedicated all his life for his people and his country.

With the agreement of the Vietnamese authorities, the ashes of emperor Duy Tân interred up to now in the Republic of Central Africa were gathered with great pomp on April 4th, 1987 in Huế, the city of imperial mausoleums of the Nguyen dynasty. This has brought an end to a long and painful banishment that has had prince Vĩnh San often known as Duy Tân ( or Friend of Reforms ) since his uprising plan against the colonial authorities was discovered on May 4, 1916 because of the treason of a collaborator, Nguyễn Ðình Trứ.

Duy Tân is an outstanding character that none of the last emperors of the Nguyễn dynasty could be equal to. One can only regret his sudden disappearance due to a plane crash that took place at the end of 1945 on his way back from a mission from Vietnam. His death continues to feed doubt and remains one of the mysteries not elucidated until today. One found in him at that time not only the unequal popularity he knew how to acquire from his people, the royal legitimacy, but also an undeniable francophile, an alternative solution that general De Gaulle contemplated to propose to the Vietnamese at the last moment to counter the young revolutionary Hồ Chí Minh in Indochina. If he had been alive, Vietnam probably would not have known the ill-fated decades of its history and been the victim of the East-West confrontation and the cold war.

It is a profound regret that every Vietnamese could only feel when talking about him, his life and his fate. It is also a misfortune for the Vietnamese people to have lost a great statesman, to have written their history with blood and tears during the last decades.

His ascension to the throne remains a unique occurrence in the Annals of history of Vietnam. Taking advantage of suspicious anti-french schemes and the disguised lunacy of his father, emperor Thành Thái, the colonial authorities compelled the latter to abdicate in 1907 and go into exile in the Reunion at the age of 28. They requested that Prime Minister Trương Như Cường assume the regency. However this one while categorically refusing this proposal, kept demanding the colonial authorities to strictly respect the definite agreement in the Patenôtre Treaty of Protectorate (1884) providing that the throne comes back to one of the emperor’s sons in case he ceases reigning ( Phụ truyền tử kế ). Facing popular opinion and the infallible fidelity of Trương Như Cương to the Nguyen dynasty, the colonial authorities were forced to choose one of his sons as emperor. They did not hide their intention of choosing the one that seemed docile and without caliber. Except Vĩnh San, all of about 20 other sons of emperor Thành Thái were present at the moment of selection made by the General Resident Sylvain Levecque. The name Vĩnh San missed at the roll-call, which forced everyone to look for him everywhere.

Finally he was found under the beam of a frame, his face covered with mud and soak with sweat. He was chasing the crickets. Seeing him in this sordid condition, Sylvain Levecque did not hide his satisfaction because he thought only a fool would choose the day of ascession to the throne to go chasing the crickets. Upon the recommendation of his close collaborator Charles, he decided to designate him as emperor of Annam as he found in front of him a seven-year old child, timid, reserved, having no political ambition and thinking only to devote himself to games like children of his age. It was an erroneous judgment as stated in the comment of a French journalist at that time in his local newspaper:

A day on the throne has completely changed the face of an eight-year old child.

One noticed a few years later that the journalist was right because Duy Tân has dedicated all his life for his people and his country until his last breath of life.
At the time of his ascension to the throne he was only 7. To give him a stature of an emperor, they had to give him one more year of age. That is why in the Annals of history of Vietnam, he was brought to the throne at 8 years of age. To deal with this erroneous designation, the colonial authorities installed a council of regency constituted of Vietnamese personalities close to General Resident Sylvain Levecque ( Tôn Thất Hân, Nguyễn Hữu Bài, Huỳnh Côn, Miên Lịch, Lê Trinh, Cao Xuân Dục) to assist the emperor in the management of the country and requested that Eberhard, the father-in-law of Charles be Duy Tân’s tutor. It was a way to closely supervise the activities of this young man.

In spite of that, Duy Tân succeeded in evading the surveillance network placed by the colonial authorities. He was one of the fierce partisans for the revision of the Patenotre agreements (1884). He was the architect of several reforms: Tax and chore duty reduction, elimination of wasteful court protocols, reduction of his own salary etc… He forcefully protested the profanation of emperor Tự Ðức’s tomb by General Resident Mahé in his search for gold, with the governor of Indochina Albert Sarraut. He claimed the right to look at the management of the country. This marked the prelude of dissension which grew more and more visible between him and the French Superior Resident. On May 4, 1916, with Trần Cao Vân and Thái Phiên, he fomented a rebellion which was discovered and put down due to the treason of one of his collaborators. Despite his capture and flattering advice of the Governor of Indochina asking him to reexamine his comportment and conduct, he continued be impassible and said:

If you compelled me to remain emperor of Annam, you should consider me as an adult emperor. I should need neither the council of regency nor your advice. I should manage the country’s business on the same footing with all foreign countries including France.

Facing his unwavering conviction, the colonial authorities had to assign the Minister of Instructions of that time, the father-in-law of future emperor Khải-Ðịnh, Hồ Ðắc Trung to institute proceedings against his treason toward France. For not compromising Duy Tân, the two older collaborators Trần Cao Vân and Thái Phiên made it known to Hồ Đắc Trung their intent to voluntarily accept the verdict provided that emperor Duy Tân was exempt from the capital punishment. They kept saying:

The sky is still there. So are the earth and the dynasty. We wish long live to the emperor.

Faithful to the Nguyen dynasty, Hồ Ðắc Trung only condemned the emperor to exile in justifying the fact that he was a minor and that the responsibility of the plot rested with the older collaborators Trần Cao Vân and Thái Phiên.

The men were guillotined at An Hoà. As for emperor Duy Tân, he was condemned to exile to the Reunion on November 3, 1916 on board of the steamship Avardiana. The day before his departure, the representative of the General Resident visited him and asked:

Sir, if you need money you may take it from the state coffer.

The money that you find in the coffer is intended to help the king to govern the country but it does not belong to me in anyway especially to a political prisoner.

To entertain the king, the representative did not hesitate to remind him that it was possible to choose preferred books in the library and take them with him during his exile because he knew the king loved to read very much. He agreed to that proposal and told him:

I love reading very much. If you have the chance to bring books for me, don’t forget to bring the entirety of all the volumes of « History of the French Revolution » of Michelet.

The representative dared not report to the Resident what Duy Tan had told him.

His exile marked not only the end of the imperial resistance and the struggle monopolized and animated up until then by the scholars for the defense of the Confucian order and the imperial state but also the beginning of a national movement and the emergence of a state nationalism placed in birth by the great patriot scholar Phan Bội Châu. It was also a lost chance for France for not taking the initiative to give freedom to Vietnam in the person of Duy Tân, a francophile of the first hour.

His destiny is that of the Vietnamese people. For a certain time, one has deliberately made all streets bearing his name disappear in big cities ( Hànội, Huế, Sàigon ) in Vietnam, but one cannot forever erase his cherished name in his people’s heart and in our collective memory. He is not the rival of anybody but he is on the contrary

the last great emperor of Vietnam.

To this title I dedicate to him the following four verses:

Devoting his whole life to his country and people,
Duy Tan the kid did not hang on to his throne.
Facing exile and humility when defeated,
His uprightness lives forever in history unabated.