No aquatic plant causes the admiration of the Vietnamese as much as the lotus. In addition to its buddhist emblem, the lotus is synonymous to purity, beauty and serenity. The lotus differs from the other aquatic plants not only by the grace of its flower both simple and distinguished  but also by the richness of the traditions which accompany it in Asia, in particular in Vietnam. In this country, it forms part of the four noble plants ( Tứ Qúi ): mai (plum tree), liên (lotus), cúc (chrysanthemum), trúc (bamboo) used in the representation of the four seasons (Tứ Thì).

In the Vietnamese art, the landscape is often built according to an ancient immutable diagram (Cổ Ðiển). This one determines the elements, in particular the characters to be put in the scene. One often finds an artistic symbiosis, an insoluble association of plant and animal in the small vietnamese paintings. This is why the lotus is always associated with a duck (Liên Áp). It is rare to find it associated with another animal unless the artist does not respect traditional conventions. The lotus is known in vietnamese with its flower under the  name « Hoa Sen or Liên Hoa « . It is part of the Nymphaeceae family and known under the scientific name of Nelumbo Nucifera or Nelumbium Speciosum. It is found everywhere in Vietnam (ponds, pools, parks, rivers etc.). It is also present in the pagodas and temples for the purpose of calming the fervors of the bonzes and to allow the visitor to feel carried furtively into nothingness thanks to the light scent released by its flowers. It develops easily and adapts to all surroundings. It contributes to the thriving of the aquatic life by purifying all dirty and muddy water that it colonizes, which makes it the symbol of a man of confucius quality (junzi). This latter, no matter where he lives, continues to remain faithful to himself, to maintain his purity in the middle of corruption. He does not let himself be contaminated by the vices of society as the lotus manages to destroy all the stench of its environment thanks to its flagrant flowers.

It is for that reason that in the Vietnamese poetry there is a poem dedicated to the man of confucian quality through the image of the lotus:

To evoke the quality of this man or the lotus, one often says in vietnamese: Cư trần bất nhiễm trần (or in English Live in the society without being contaminated by its vices.)

The lotus has other qualities which enable it to belong to the chinese and vietnamese noble plants. It is what has inspired a Chinese Zen Buddhist sect known under the name  » Pháp Hoa Tông  » at the period of Tang to give birth to the doctrine  » Diệu Pháp Liên Hoa Tông « .  This one was  based only on the worship of life in relying upon the quality of the lotus. One found at that time in this sect the bonze poets Phong Cang and Thập Ðắc as famous as Lý Thái Bạch (Li Tai Bai) (1) , Bạch Cư Dị ( Bai Juji )(2). This sect whose pagoda was in Hàn Sơn in the neighborhoods of the city Cô Tô cultivated only the lotus in its ponds. It thought that one could find peace in the heart and free oneself from reincarnation and the fires of concupiscence while depending on this doctrine which borrowed from the lotus the character:

That makes it possible for the young buds  to sprout as they already carry seeds at the time of their formation. This is why the Vietnamese say the following about the lotus: Nhân quả đồng hành to mean that the seed is made at the same time as the fruit. Buddha (3) was accustomed to using the lotus to name the person who has succeeded in freeing himself completely from concupiscence because the latter is the source of all human sufferings (duhkha) and of successive reincarnations.

The lotus is often visible in the vietnamese art, in particular in buddhist architecture. The motif that identifies the lotus in the decoration always has eight petals indicating the eight cardinal points and reproduces the mandala, geometrical and symbolic representation of the Buddhist Universe.

In the Vietnamese pharmacopea, the lotus seeds are used in the treatment of diarrhea, dysentery, erotic dreams. These seeds are considered sleeping pills when they are eaten raw and in great quantity. The consumer can fall asleep rapidly if he absorbs the green germ found in the middle of the seed. Formerly, the young vietnamese boys were accustomed to offering lotus flowers to declare their feelings to their beloved. One also finds candied lotus seeds and tea aromatized with lotus in all the traditional festivals of Vietnam, in particular that of Tết without forgetting to note for the epicurians in the art of vietnamese cooking that there is a delicious dish, the lotus salad.

The land of legends as is our Vietnam was plunged into war, injustice and corruption. Any Vietnamese in love with peace, justice and freedom always cherishes the hope to see that one day his country find serenity, splendor and dignity in the image of purity of this aquatic plant.

Its grace was evoked by the king poet Lê Thánh Tôn in his poem Hoa Sen at the time when Vietnam was at the height of its glory and radiance:

The lotus flower is of a beautiful whiteness and perspicacious thanks to the contribution of water
Its penetrating fragrance is spread into the sky. 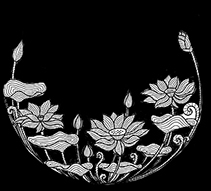