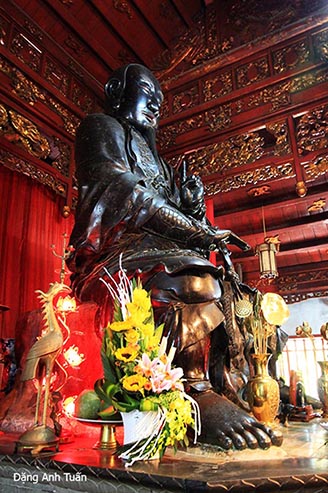 Not far from Lake of the West (Hồ Tây), Quán Thánh is one of  the inescapable sites of Hànôi city. This sacred  temple is reserved to the cult of Taoist God named  Huyền Thiên Trấn Vũ considered in Asia as the emperor of the North (Bei Di (or Bắc Đẩu in vietnamese)) ruling on the underwater world. According to  the judicious arrangement of Feng Shui, (Phong Thủy), it is  erected with three  others  for purpose of protecting Thăng Long capital against strangers and  evil spirits, each going in the well-defined direction (Bạch Mã temple Hàng Buồm at the East, Voi Phục (Thủ  Lệ ) temple at the West,  Kim Liên in the South and Quán Thánh in the northern Hanoi). It is often said that this temple was erected in 1010 under the reign of Lý Thái Tổ king. The  statue was made of wood at the beginning of its installation. Despite successive  renovations under the Trần dynasty,  it was  only in 1677 under the reign of Lê Hy Tông king that the restoration was significant with the installation and replacement of the statue in bronze-black and the bell tower of the temple. 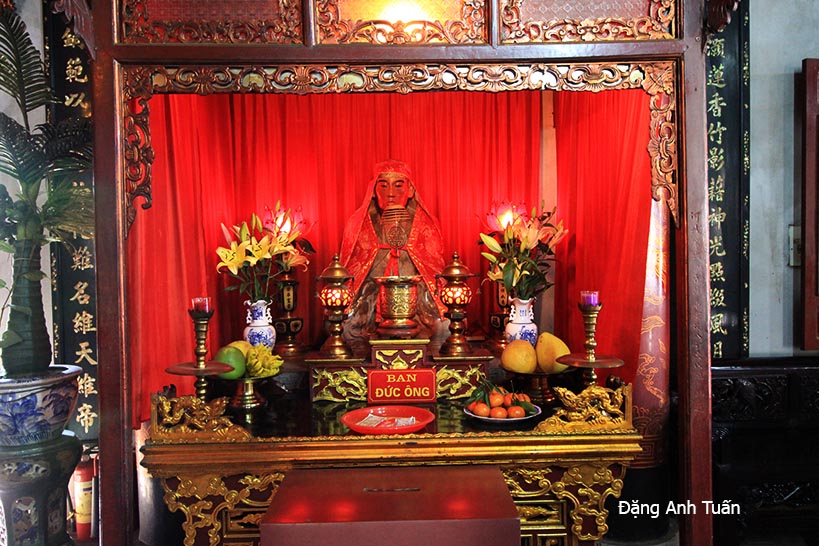 This colossal statue of 4 tons and about 4 meters  in height, was placed on a marble platform having one metre in height. In a  sitting position with a square face and barefoot, the statue has a taoist traditional dress. It holds  in the right hand, a sword pointing on the turtle’s back and superbly decorated by the presence of the coiled snake while in the left hand, a Taoist mudra, a codified  ritual sign is visible by way of exorcism. Being associated to the direction of the North and  water, the color must be black  according to the theory of five elements (Ngũ hành). It is the explanation found in the color selection for the statue.

The fine detail and the imposing size of this statue made almost four centuries ago, unquestionably reveal  the prodigious exploit and  know-how of  Ngũ Xã village steelworkers of this time under the supervision of Vũ Công Chấn.

This temple is not only  the one of  last Taoist temples found in the capital but also the ideal place for those who like  serenity and calm in the town so loud and vibrant as Hànội city.