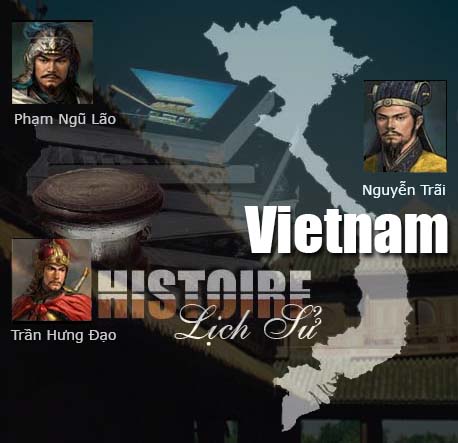 The word Vietnam was first known only in the 19th century when Emperor Gia Long decided to rename the country from Nam-Viêt. Marco Polo evoked it in the account of his voyage entitled The Book of Marvels under the name of Caugigui ( Giao Chỉ Quán ). Vietnam’s history can be summarized in a few words: struggle for independence, conquest of new land, and reunification of the country. The Vietnamese appear for the first time at the Bronze age ( Ðồng-Sơn civilization ). The Vietnamese tribes who lived scattered south of China and north of Vietnam were undoubtedly wandering hunters kind of people who, because of hunting, liked to move constanly beyond the borders. The Chinese character « nam » ( or « nan » in Mandarin ), meaning « southern », was used to indicate these Vietnamese of the South as to differentiate from the Vietnamese of the North who remained in China. As for the word Viet (or Yuê in mandarin ), it was used by the Zhou dynasty ( 1050-249 B.C ) to indicate the territories located south of China. These Vietnamese of the south, or Southern Vietnam had, by the end of the second millenium ( two thousand years ) formed kingdoms.

The first kingdoms of the legendary dynasties were located north in Tonkin. By the 10th century they had, as a name kingdom Văn Lang, then kingdom Âu Lạc, started from the Red River delta, the cradle of the Vietnamese nation, a movement characterized as Nam Tiến (Advancement toward the South)

This nation relentlessly pushed new cells in each parcel of land favorable to its mode of growth. It was based on a multitude of small, politically independent hearths consisted of soldier-peasants reeinforced sometimes by troops from the central authority and behaved like a gigantic madrepore forming its atoll littlle by little, ending up with enclircling and assimilating the new country and thus enlarge Vietnam. It constituted an undeniable advantage for a policy of expansion but would on the other hand always require a strong central authority. The Wise  Confucius had already talked about these Vietnamese in his Book of Rites ( Kinh Lễ ). Thanks to the prehensile capability of their well detached big toes from the others, these Viets could cross rice fields and climb mountains without ever being tired. The history of Vietnam is not that of dynasties or great movements of thoughts. But it is the history of a people of stubborn peasants who work hard in their rice fields and leave their marks in the landscape.

At the least relaxation of the latter, the country crumbles easily. This is one of the main reasons of why the history of Vietnam is filled with disorders and eternal wars. It had the advantage of a triple coherent national structure: a bureacratic state built on the Confucian model around an imperial function having the mandate of Heaven, the family, and the village. This helped in preserving the country’s civilization lived by each and every Vietnamese like a total attachment to the forces of the land and the ancestors. This policy of nibbling silkworms allowed the slow absorption of the space occupied by the Khmer and the Chàm people. Their vestiges currently found in central Vietnam ( Phan Thiết, Ðà Nẫng etc.) and in the delta of the Mekong River illustrate very well this conquest.

The attachment to independence has been proven many times in the past and in the war in Vietnam. It requires long centuries of struggle, wars, pains and jolts for Vietnam to finally become the size of a dragon today. One finds in the history of Vietnam a succession of small stories that the draftmen and storytellers Vink and Sơn succeeded in telling through theircomic strips. They know how to give to each a resonance of grandeur of a people who witness the dignity and the nobility in their poverty and sufferings. One finds in this history two thousand years of constant fight against the  nature and water, which translates into not only a close attachment to the land but also an intimate and profound agreement between these peasants and this nature. Paul Mus did not hesitate in underscoring it in his work entitled « Vietnam, Sociologie d’une guerre, Paris, le Seuil 1952 ». This agreement proved to be so intimate that, everywhere where these circumstances were realized no people has resisted the thrust of the Vietnamese, nor any foreign force then came to the end of their engagement on the ground.

In spite of the Chinese occupation for one millenium, the Vietnamese ingrained of their culture, have preserved their language although it was transcribed in Chinese characters and later romanized after the arrival of Alexandre de Rhodes. If the Vietnamese have not refused any contribution from abroad, it is because they have succeeded with the « Vietnamization » in keeping what is dear to any people in the world, and that is the traditions. It is those that have been transmitted from one generation to the next by the frail men whose feet are buried in the mud of the rice field.

How not to stick to this Vietnam, this lost country where sacrifice is not a vain word? This sacrifice is found time and again in the Annals of the history of Vietnam. I would rather be a ghost in the South than a prince in the North, declared General Trần Bình Trọng before being executed by the Mongols in 1257. Life is a game of chance. The chance is against us. It’s worth dying now for the country and set an example of sacrifice, said the nationalist leader Nguyễn Thái Học before being guillotined on June 17, 1930 in Yên Bái. How to erase in the collective memory the innocent face of the young captive emperor Hàm Nghi, exiled to Algeria at the age of 18 with tears in the eyes? How to forget the tragic death of the exiled emperor Duy Tân ( an aircrash in OuBangui-Chari, Africa ) whose announced return could probably change in 1945 the regrettable events of the history of Vietnam during the last decades?

How not to regret this native country that was however not tender ?. It was the feeling expressed by writer Huỳnh Quang Nhường in his best-seller « The land I lost », published by Castor Poche Flammarion.

Is a country that I like to exist still in the course of its history?.