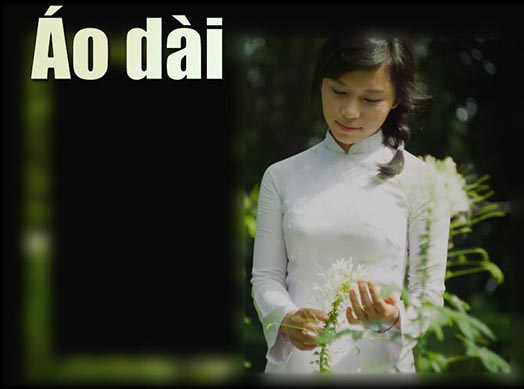 Áo dài is always considered a symbol of traditional Vietnam. A foreign tourist who lands in Vietnam has the opportunity to see a woman dressed in her áo dài.

It is about a close-fitting long tunic in light fabric, open on the sides from the waist down, worn over a large pants. It will be surely of speechless admiration facing this incarnate elegance. It is not the clothe that provokes this admiration but rather the relation between the woman, her dress and her culture. However the a’o dài has only a short history. It just dated from 18th century.Impressed by the elegance of the Manchurian costumes under the reign of the Qing, a Vietnamese lord of the name Nguyễn Võ Vương established the wearing of a Vietnamese national dress inspired by the Chinese model. It should wait one century before this dress is adopted in the popular strata of the Vietnamese society, in particular during the reign of emperor Minh Mạng.

This dress becomes nowadays the national symbol with more and more varied models in colors as well as in decorative patterns. Most Vietnamese wear it.