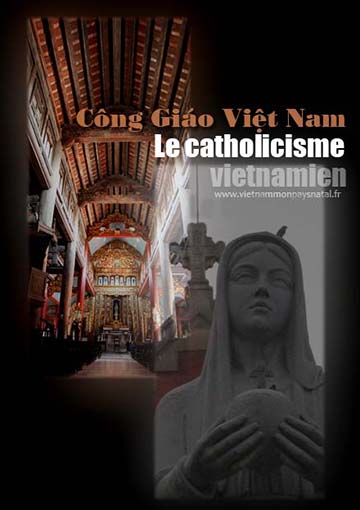 Contrary to other religions, Catholicism stumbled tremendously over several hardships at the beginning of its establishment in Việt-Nam (at the start of 16th century). This was due a great deal to the missionaries’ refusal to adhering and integrating the cult of ancestors and customs (polygamy, belief in spirits etc…) into Catholicism and at a time when Vietnam was troubled by ceaseless internal wars.

It is the period when Vietnam knew the same fate and condition as Japan’s with a legitimate dynasty put under the guardianship by a family of hereditary ministers. This was what father Alexandre de Rhodes noticed in his book « History of the Kingdom of Tonquin ». He stressed that what people said about Tonkinese Chúa has a lot to do with what was told about Japanese Daishi. Therefore Catholicism was perceived during that period in variable manner by the governing families Trịnh in the North and Nguyễn in the South in their never ending conflict, taking the king as their hostage. It was alternatively tolerated, forbidden or even persecuted. In spite of that, Catholicism began to find a favorable echo among the deprived and even in the royal court in the person of Alexandre de Rhodes himself.

He was an outstanding individual with his exceptional linguistic capabilities. He was born in Avignon in 1591 and issue of a family of merchants probably in Israelite birth. He was the one who was chosen to head and manage catholic missions to the Kingdom of Tonquin.

He tried to gain the favor of the lord by means of their entourage and gift giving, in particular clocks and books on mathematics. Thus, he found a very neat success with lord Trịnh Tráng in North Vietnam. On the other hand, he was chased by lord Sãi Vương in the South even though he had succeeded in converting a relative of his, baptized as Marie-Madeleine. Appalled by failure against the South, lord Trịnh Tráng held foreigners responsible, especially catholic missionaries. He ended up banning conversions under penalty of death. Indefatigable missionary Alexandre de Rhodes was finally expelled in May 1630 from Vietnam leaving behind at least 50,000 Catholics trained by Vietnamese catechists and a cultural heritage that no Vietnamese nowadays will do without. His name continues to be dear to our collective memory because thanks to him we are the only country in the Far East to have a Roman alphabet.

Inspired by Ricci’s and Diogo de Pantoja’s works on romanization of Chinese, he came up with giving us not only a linguistic notation system based on the tonalities of the Vietnamese tongue and completed for the circumstance with a system of accents used in Polish, Hungarian and Portuguese, but also an instrument of intellectual emancipation and cultural proliferation unequalled in the Far East. He published his Vietnamese-Latin-Portuguese dictionary in 1651. Because of his expulsion from Vietnam, his work was not finished and later was retaken and completed by Mgrs. Pigneaux de Behaine and Taberd. Vietnamese Catholicism only found its slack period during the Tây Sơn unrest and witnessed its apogee at the reunification of the country under the banner of emperor Gia Long. This one was protected and hidden by Mgr. Pigneaux de Behaine when he was still the young prince Nguyễn Ánh beaten, hunted down and chased by the Tây Sơn troops in the south of the Mekong delta (Hà Tiên, Poulo Condor). Faithful to the memory of the one who gave him food and helped him conquer the throne with his French mercenaries, Gia Long, during his reign, while respecting the missionaries and their Christians, has known how to adopt an attitude similar to emperor Kangxi’s of the Qing in China (1661-1722) by a blend of tolerance, interest and open mind even though he was in favor of the renewal of traditional Confucianism. His death (in 1820) was followed for forty years by an almost complete elimination of western influence and a series of persecutions against the Catholics under the reigns of Minh Mạng, Thiệu Trị and Tự Ðức.

In spite of that, Vietnamese Catholicism continued to grow somehow and arrived at, in the person of Nguyễn Trường Tộ, avoiding combining religion and France who pretended to defend against Atheists. Nguyễn Trường Tộ was born to a catholic family of Nghệ An (North Viê.t-Nam). Following bishop Gauthier in his voyage to Europe, he had the chance to take classes at Sorbonne in Paris at that time. With the view of a patriotic, catholic and intellectual Vietnamese having the chance to go abroad, he kept believing that the only way to save Vietnam from foreign threats and maintain independence for his country, would be primarily through opening up the borders not only for the French but also for the British and the Dutch and by a whole range of political, social and technological reform projects aiming at helping Vietnam to come out of isolation, to modernize and to be equipped with better technologies in order to confront foreign territorial ambitions.

His memorandum was unfortunately not sustained by emperor Tự Ðức. Facing a group of Confucian, strongly structured mandarins who surrounded the emperor poet Tự Ðức, he had to retire a few years later to his native town and died in 1871 taking with him the sadness of a catholic patriot to see his country sinking into chaos and servitude. Torn by his faith and patriotism, Nguyẽn Trường Tộ succeeded in showing us by his behavior and exemplary conduct that it is possible to be a fervent catholic and a defender of national independence at the same time.

Despite a long period of conflicting relations with the nation, Vietnamese Catholicism wrongly accused of connivance with foreigners, knows how to show along with its existence, not only its capability of resistance, resignation and adaptation but also its strength, vitality and active and constructive participation that the country needed in the dark moments of Vietnam’s history. Concerned with improving the lot of the deprived, Vietnamese Catholicism knows how to run in the past as well as at present, charitable and humanitarian activities worth the love of Christ through schools, orphanages etc…

That is how it succeed in penetrating the combination of the three religions (Buddhism, Confucianism and Taoism) and ends up with forming one body with the spirituality of Vietnam. Catholicism has for a long time been the second national religion. With 8 million Catholics, Vietnam becomes the second catholic country in Far East after the Philippines.