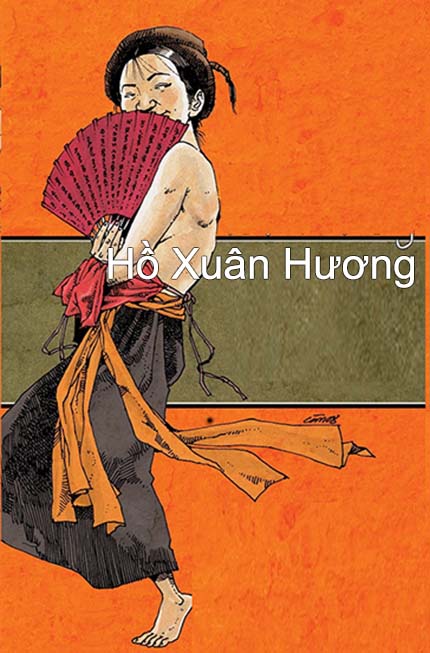 Speaking of Hồ Xuân Hương  creates in everyone of us not only an ardent admiration but also food for thought back to the time when Confucianism kept on draining all the vital outbursts of a closed society and literature, the source of social prestige remained in having the exclusive right to sit in the triennal examinations for the recruitment of mandarins. Before occupying a good place in the official history of Vietnamese literature published in 1980 by the Institute of Literature of Vietnam, Hồ Xuân Hương was in the past a source of inexhaustible controversy between those who saw in her a wonderful woman who dared without shame to tackle the rights to her sex and carnal love in the time of feudal darkness, and those who found that her poetry, putting too much accent on the glorification of sexual instinct, was a disappointment for the Vietnamese literature and an attack and an stain to the model Vietnamese woman.

It should be admitted that Hồ Xuân Hương is a woman ahead of her time, a woman who knows how to use her intelligence to denounce hypocrisy and absurdity at a time when society was ruled by unchanging Confucian ethics, a woman who dares revolt against prohibitions and taboos for the liberalization of the woman, physical as well as moral. She loved to confront and beat Messieurs the learned men with their own weapons. She succeeded in evading formal censorship by an uncommon cleverness, proceeding with allusions and metaphores.

Summer breeze is sporadically blowing,
Lying down the young girl slides into sleeping.
Her bamboo comb loosely attached to her hair,
Her pink bra below her waist dropped down fair.
On these two Elysian mounds, the nectar is still remaining,
In that one Fairy rivulet, the current seems to stop flowing.
At such a view, the gentleman hesitated,
Odd to leave, yet inconvenient if he stayed

Yin and Yang created this chunk of rock;
A deep and dark crack split it into two blocks.
Moss covered openings expose themselves with impudence
Wind enhanced firs produce sound of rhythmic cadence.
Drops of romantic water fall with splash
Roads to nowhere lead in dark labyrinth.
Praise to the scuptor inventing this distortion
Indecent exposure invites lots of observation

Are you seventeen or eighteen?(1)
Let me cherish you by all means.
Thin or thick you display a triangle, and
Large or small I hold you with one hand.
The more it is hot the fresher you will submit,
Not enough love at night, daytime will make it.
Your cheeks are rose pink and give you grace,
Lords and kings love you because of your face.

(1): Seventeen or nineteen branches of the fan could be understood as seventeen or eighteen

The Great poetess of Vietnam

To talk about things the most crude in society, about erotism in particular, she resorted to harmless description of the landscape and familiar objects. The Jack-Fruit, The Floating Cake, The Fan, The Grotto of Cắc Cớ, Weaving at Midnight, The Day Sleeping Girl are the titles the best known and witness her talent and knack of knowing how to create the rhythms comparable to those in popular songs ( ca dao ) and use a surprisingly simple vocabulary in her poetry. A manuscript in « nom » from the Library of Sciences recorded in 1912 counted only 23 poems but it is noted that the number of poems attributed to Hồ Xuân Hương has grown with the time. Therefore even its existence was put to doubt in the past. Hô` Xuân Huong could have been original of Quynh Doi village, Quynh Luu district, Nghe An province. Her father Hô` Phi Điền is issue of the Hồ family of scholars (Hô` Phi). According to the French researcher Maurice Durand, she was not very attractive physiaclly based on the two verses from Hồ Xuân Hương’s Jack-Fruit:

My body is like the jack-fruit on the tree,
Its skin is rough, its clove is thick.

This deduction seemed less convincing by the fact that even she was not beautiful, she must have been charming because she was married twice then widowed and having many flirts such as Chiêu Hô` (Phạm Đình Hô`). Because of her biting and licentious verve, some people see in her a sex maniac, a genie of lust; that is the case of Nguyễn Văn Hạnh and the French researcher Maurice Durand in « Works of Vietnamese poetess Hồ Xuân Hương », Ecole francaise d’Extreme Orient, Adrien Maisonneuve, Paris 1968. On the other hand, other people do not hesitate to defend her with fanfare, finding her not only a feminist of the first hour but also a woman having the gut to live and defy a society of mummies and ghosts. It is the case of writer Nguyễn Đức  Bình in the monthly review Văn Nghệ. ( Arts and Literature ) No. 62.

Light turned on, it is found such a white,
The stalk moves slightly and repeatedly all night.
Pushing with the feet, but lightly release,
Shuttle passing through brings joy and ease.
Large or narrow, small or big they all fit,
Long and short, size and form so be it.
To make it best, girl needs to soak it with care .
The cloth color won’t fade before three whole years.

If Hồ Xuân Hương is a rose with thorns, a lonely and almost unique voice in the Vietnamese literature, she has nonetheless the courage and the audacity to throw a stone and spread the trouble in a stagnant and rotting pond that became the Vietnamese society at the end of 18th century. Contrary to other great scholars preferring looking for solitude to devote themselves to contemplation of nature and meditation in drunkenness, Hồ Xuân Hương preferred to combat it alone at her time using her verve, her poems to experiment the wrath of a woman revolting and thundering against injustice of the Vietnamese society. She deserves the homage that American writer Henri Miller rendered two centuries later to a female writer of 20th century in his forewords for  » Fear of flying » by Erica Jong, Robert Laffont, 1976:

She writes like a man. However it is a woman with 100% woman. On many points, she is more direct and more frank than many male authors.