Without the curiosity and open-mindedness of this young French military man, the Vietnamese popular woodcut would probably have been in oblivion and disappeared forever with the ups and downs of the war. The Vietnamese woodcut has its origin dated back to 15th century, at a time when scholar Lương Như Hộc introduced its fabrication technique on his way back from an official mission to China.

Henri Oger was one of the rare Frenchmen who, at the beginning of the century, was able to discover a millennium of wealth in traditions and customs throughout the Vietnamese society which was then closed to strangers, poor and backward. He took the initiative of creating an encyclopedia consisted of 10 volumes describing all aspects of the Vietnamese society in the old days: craftsman’s works, festivals, farming techniques, ancestral customs etc.. by requesting about 30 wood carvers to engrave designs on wood and then, because of weather conditions, imprint the engraving on the spot using the Vietnamese traditional methods. It should be acknowledged that the love of Vietnam and its people has allowed Henri Oger to overcome at that time all hardship in fund raising and in the realization of this huge work ( more than 4000 designs in all ). 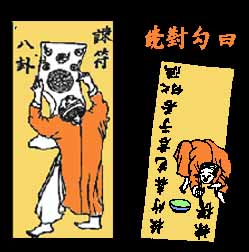 He did not get any help from the French government at all. He only got subscriptions from some two dozen persons, in the amount of 200 piasters.

In spite of that, Henri Oger has succeeded in leaving to the Vietnamese people a priceless treasure. His work was unknown to the French and Vietnamese public for decades. Only in 1978 did an exhibition entitled « Peasant Painters of Vietnam » take place at the Cultural Center of Bourges. Three of his works are presently kept at the National Library of Hanoï and Saïgon City but only in the latter we find his 10 volumes in their entirety.