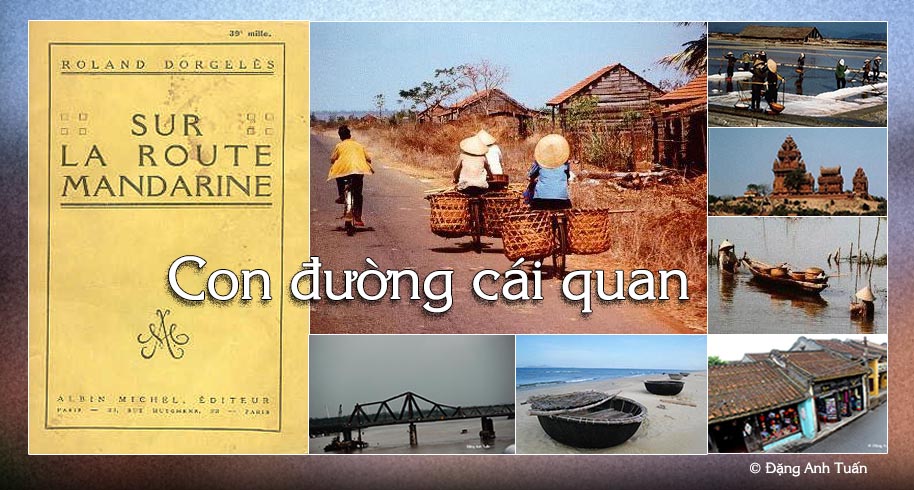 If a tourist has a chance to travel by car from Saigon to Hanoï, he has got to take the « mandarin route » (or route No.1 ) as it is the only one that exists on the road network in Vietnam. We owe the name of « mandarin route » to the French who named it in 19th century because it is certain that it was the road taken by mandarins and high functionaries to travel rapidly and easily between the capital and their provinces. This route is born in the swamps of  Mekong delta infested with mosquitoes. It begins at Cà Mau and ends at the post of Ðồng Ðằng on the Sino-Vietnamese border in the region close to Lạng Sơn. It is often said that this route is the country’s backbone that looks like a sea horse. This route is 1730km long, linking several cities, in particular Saigòn, Phan Thiết, Nha Trang, Qui Nhơn, Hội An, Ðà Nẵng, Huế, Ðồng Hới, Hà Tịnh, Thanh Hóa and Hanoï.

It is generally covered with asphalt, but often on some sections, it was badly paved and weighed down by a multitude of trucks, bicycles, pedestrians, buffaloes, cows, and troops of ducks walking on. The bitumen often breaks, causing the grandmother perching side-saddle on the baggage carrier and girls leaning on too big bikes, to jump. Those are the familiar scenes often encountered on this road.

One also finds harvested rice and manioc left to dry on asphalt heated by the sun in the North. On this route, one can see on a side of Sa Huynh, the salt fields or mounds of salt recovered from the foliage and set up alongside of the road. The further one goes north, the more one sees peaceful landscapes of flooded rice paddies.

One often crosses children leading herds of buffaloes daubed with mud. At the edge of Hoa Lư, the ancient capital of Viet Nam, silhouettes of rocky hills emerge from the bluish mist.

Despite its bad condition especially in North Vietnam, it continues to be the axle road vital to Vietnam. For those who like to know the history of Vietnam, the history of the long march towards the South, it is suggested that this route be borrowed because one would find not only the vestiges of a lost civilization in the whirlwind of history, the kingdom of Champa, but also the marks and traces that Vietnamese settlers, for the past decades, succeeded in carving during their passage.

To know this route is to know not only the immense rice paddies, rubber tree plantations, beautiful sightseeing points on the coast of Vietnam, very beautiful panoramic views from one delta to another, superbs passes (in particular the Hải Vân pass) and wooded hills, almost desolate waste lands, but also an intensity of a Vietnamese agricultural life through hamlets located alongside of the route.

To know this route is to also know the Hiền Lương bridge. It was built by the French in 1950, destroyed by an American airplane in 1967, 178 meters long. It certainly evokes an episode when Viet Nam was divided and when one-half of the bridge was painted red and the other half yellow. It is located at the 17th parallel, in a zone where one of its sections, known during the Indochina war as « the Road without Joy » as French troops encountered fierce resistence there.

To know this route is to know the Hải Vân pass. It is located at 28km north of Ðà Nẫng ( or Tourane ) and only 495m high. As its name indicates, it is always in the clouds because it is close to the sea, which allows it to receive important masses of humid air. In the old days, it marked the frontier between the North and the South and protected the Chams from the Vietnamese appetite for land.