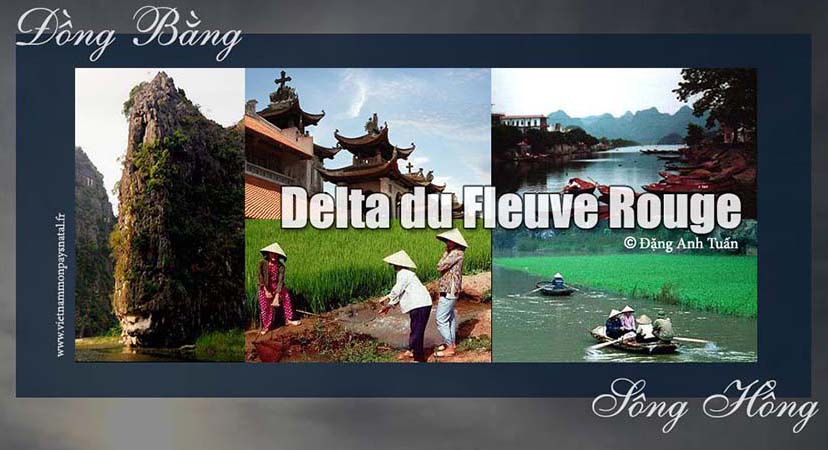 Contrary to the Mekong Delta, the Red River Delta contains many historical vestiges. It is the cradle of the Vietnamese nation. Found here, near Thanh Hoá in the Mã River valley is the presence of an civilization in the millenium before Christ at the Bronze Age called Dongsonian Age. Also started with the Bronze Age, the mystical periods of Vietnam’s history. The first legendary dynasty, that of Hồng Bàng, would have reigned until 3rd century B.C. From this delta has begun at the beginning of10th century the Nam Tiến Movement (or the Descent toward the South) started by General Lê Hoàn and finished in 18th century by the kings Nguyễn.

To dominate and control its water and its vagaries, the Vietnamese people had to build and consolidate dikes ceaselessly. These dikes existed for a thousand years and broke sixteen times during the past twenty-five years. It is because of the Red river that the Vietnamese people has been haunted with the domination and control of water. Since the beginning of our era, the Vietnamese people have been compelled to organize, perform, and maintain water amnagement works. This has brought to the Vietnamese the virtue of being more patient, more obstinate, keener, hard working and methodical in dike construction, canal digging, embankment building and breach filling. In this delta is found a sophisticated network of drainage canals and high dikes that only a centralized state on water control such as Vietnam knows how to realize.

It is itself that witnessed several decisive battles of the Vietnamese people against their invaders. It is thanks to its complicity that General Trần Hưng Ðạo defeated the Mongol army by planting on its bed pikes that broke the Mongol ships in 1288 at the mouth of the Bạch Ðằng river, renewing the tactics used by General Ngô Quyền against the Chinese in 938 (a victory that put an end to the thousand-year Chinese domination ). It is also witness of the Yên Bái uprising led by nationalist leader Nguyễn Thái Học in 1930. Its destiny is that of the Vietnamese people. It is it that gives the capital of Vietnam the last name Hànội (Hà means river, Nội means inside, interior).

Hà-Nội means « On this side of the river ». This city was founded by king Lý Thái Tổ (Lý Công Uẩn) in year 1010 at the neighborhood of Ðại La that geomancers believed to be favorably sheltered from the waters of the Red river. It is also called Thăng Long (City of Ascending Dragon) because, in his dream, Lý Thái Tổ saw a golden dragon flying from that locality.

It is it that saw Hanoï  growing with its thirty-six business streets and lakes. Writer Thạch Lam of the « Tự Lực Văn Ðoàn » writing club talked about It in his novel « Hà Nội 36 phố phường« . It is it that gave birth to the French construction of the Paul Doumer (now Cầu Long Biên) bridge 1680 meters (approx. one mile ) long at Hà Nôi.

Thanks to its silt rich in iron, and with its irrigation, the delta is so fertile that it is possible to have one more harvest in November. It is it that shapes the landscape of the delta. Every day are seen women leaning under their conical hats, feet and hands in the clay, children coming from school surveying the dikes, motionless buffaloes in their mud baths under a sun that is sometimes overwhelming. It is it that often floods the plain of Hoa Lư, the old capital of Vietnam until 11th century.

The Red River is the second largest river of Vietnam after Mekong. It descends from Yunnan, a mountainous region south of China. It is known as the « six-head river » that enters Vietnam definitively at Lao Cai. It curves on more than 1000km ( over 600 miles ) before dying in the somptuous bay of Hạ Long. This one is the eighth wonder of the world. It counts more than three thousand isles, islets, and reefs. One finds rocks of varied forms. Some are tiny, others are of important dimmension bearing picturesque names such as isle of the Wonder, isle of the Surprise, the Marionettes, the Monkeys, the Toad etc…

The Ha Long bay has become for the past few years the site most visited by foreign tourists when they landed in Vietnam. Mini-cruises by junk make it possible to visit it. It is in this bay, according to the legend, that a dragon would have descended to tame the sea currents. That is why the Vietnamese called it Hạ Long (or the site of the Descending Dragon).

Impressed by the splendor and beauty of this bay that he visited by junk in 1468, king Lê Thánh Tôn left some unforgettable verses in witness of his emotion:

High summits are drawn up as a crowd in the sea like many jewels
Bluish tops are dispersed like the falling stars and the pieces in the chessboard of waves.
Fish and salt, abundant like sand, offer a rapid gain to people