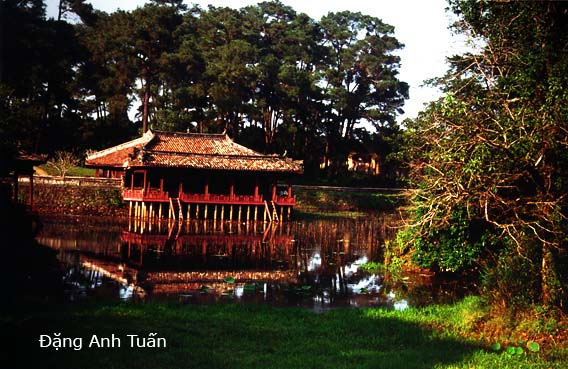 Unlike other royal tombs of the Nguyễn Dynasty, Tự Ðức mausoleum  is primarily a possible place of refuge during his reign. That is why there is not only a palace which was later transformed into a place of worship after his death but also a theater and two small and pretty pavilions in red wood (Du Khiêm and Xung Khiêm) where he liked to sit for the relaxation and the composition of his poems. This mausoleum which was built during 1864-1867 by three thousand soldiers and workers, had approximately fifty buildings surrounded by a stone and brick wall 1500 meters in length in an area of 12 ha.

Tự Đức was crowned king at a time where he have had to cope not only with development of Western capitalism but also internal strife (war grasshoppers led by  poet Cao Ba Quát, the eviction of his elder brother Hồng Bang at his enthronement etc..). For taking refuge, he did not hesitate to order the construction of his tomb as a place of relaxation in his lifetime and remains a place of residence for eternal future life.

In this mausoleum, the pavilion Hoa Khiêm is the main building where the Emperor worked and the pavilion Lương Khiêm is where he lived and slept. One finds also in the domain of his mausoleum two other tombs: those of his wife, Queen Lê Thiện Anh and one of his three adopted son, King Kiến Phúc.

The architecture of this mausoleum reflects not only the nature of the romantic poet emperor Tư Ðức but also the freedom that is lacking so far in the other mausoleums. Nothing is surprising to see this mausoleum become one of the favorite places choosen by most foreign and Vietnamese tourists.