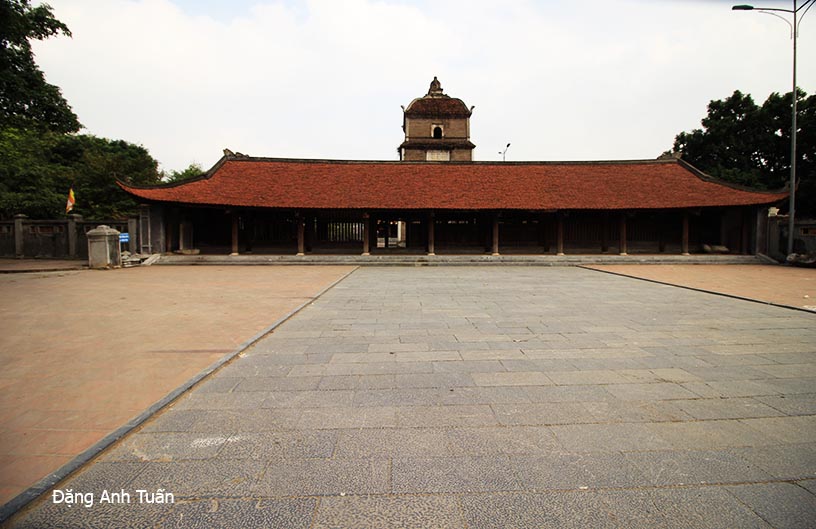 Dâu pagoda  visible from its porch

About 30 kilometers from Hanoï, Dâu pagoda is the most religious building in Vietnam because it was constructed in early Christian times in Dâu region known frequently during this period under the name “Luy Lâu”. In Chinese times, Luy Lâu was considered as the capital of Giao Châu (Giao Chi) from 111 B.C. until 106 B.C. At that time, according to Vietnamese researcher Hà Văn Tấn , the buddhist influence coming from India was accepted very early until the 5th century. Chinese governor Si Xie ( Sĩ Nhiếp in vietnamese) (177-266) also was accompagnied   in town by clerics coming from India (người Hồi) or Central asia (Trung Á) for each trip. At the end of the second century, Luy Lâu becames the first vietnamese buddhist centre  with 5 old pagodas: Dâu pagoda devoted to cloud genius  Pháp Vân (“thần mây”), pagoda Đậu to rain genius Pháp Vũ ( “thần mưa”), Tướng pagoda to thunder genius Pháp Lôi  (“thần sấm”),   Dàn pagoda to thunderbold genius Pháp Điện ( “thần chớp”) and main pagoda belonging to the mother  Man Nương of  that 4 geniuses (or Tứ Pháp in vietnamese). The Sino-Vietnamese words Dâu, Đậu, Tướng, Dàn  were preferred by the Vietnamese instead of using the names  Mây, Mưa, Sấm , Chớp (Cloud, rain, thunder and thunderbold) in close relation with the natural force found in the agricultural environment. The system based on that 4 geniuses evokes the subtle association between the buddhism  and popular beliefs coming from a  primitive society in Vietnam.

Accordingly, a lot of  Indian and foreign religious such as  Ksudra (Khâu Đà Là), Ma Ha Kỳ Vực (Mahajivaca), Kang-Sen-Houci (Khương Tăng Hội), Dan Tian did not wait long to stay at Luy Lâu and to preach the Buddhist teaching. The number of monks is so important that Luy Lâu becames in just a few years later the translation centre for sutras among which was found the famous sutra Saddharmasamadhi (Pháp Hoa Tam Muội) translated by kouchan monk Cương Lương Lâu Chi (Kalasivi) in the  3th century. According to  zen  monk  Thích Nhất Hạnh, one had the tendency to believe by mistake in the past that   Indian monk Vinitaruci introduced the Vietnamese Dhyana buddhism (Thiền) at the end of 6th century. During its passage to Luy Lâu in 580, he lived in the Pháp Vân monastery belonging to the dhyana school. It was during this time that  dhyana monk Quán Duyên  was beginning to teach here  the dhyana.

Other monks went in China for preaching the Buddhist law before the arrival of  famous monk  Bodhidharma known as  the partriach of  dhyana  school  and Chinese martial art.  By now, it is known that Kang-Sen-Houci (Khương Tăng Hội) monk coming from Sogdiana, had the merit of introducing the dhyana buddhism in Vietnam.  The Buddhism began to implant itself at Luy Lâu via  Man Nương history  and encountered no reluctance from the Vietnamese because it accepted the  tolerance and the traditional paganism. Thích Quang Phật and and Man Nương Phật Mẫu legends attested the easyness to aggregate  popular beliefs with  the buddhism.  One can say the marriage is successful between   buddhism and popular beliefs (Mây, Mưa, Sấm, Chớp) found in the corner.  The Buddha’s birthday also was  that of 4 geniuses who became Buddhas. The mother Man Nương of these 4 geniuses was also venerated   as Avalokiteśvara. One did not hesitate to install the Buddha altar in places where these 4 geniuses have been venerated. From now on, the buddhism began to propagate longer in other regions of Tonkin.  The Vietnamese buddhism was the Mahayana and took two ways in its propagation: seaway from South Vietnam (Funan and Champa) and land way from North Vietnam via Yunan.