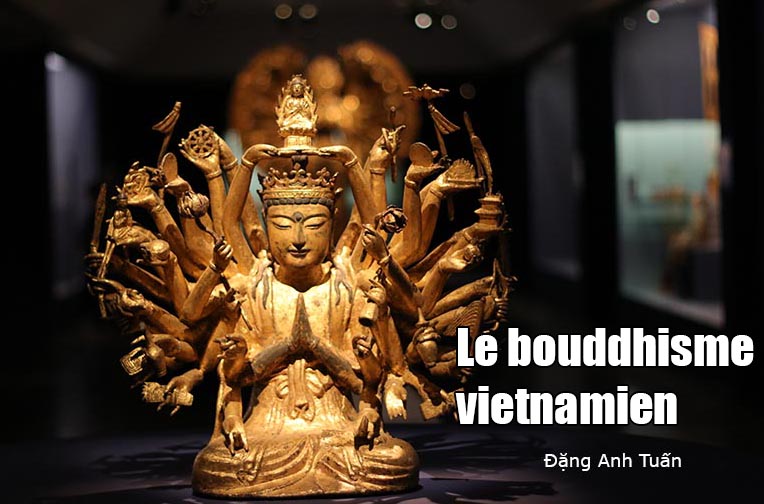 We do not know exactly the date Buddhism was introduced into Vietnam but on the other hand, we are however certain that this new faith has come to Vietnam by maritime way by the strait of Malacca. Vietnamese Buddhism is above all Mayahana Buddhism( Great Vehicle or Ðài Thừa in Vietnamese ). It is less pure, often blended with philosophical concepts of Confucianism and Taoism. As Vietnam is situated on the big road of pilgrimage between China and India, the most part of Vietnamese scholars at that time were only Buddhist monks who knew Chinese and Sanskrit perfectly well.

When Vietnam was established as an independent state in 939 at the fall of the Tang dynasty, it was the Buddhist monks who, being the sole true holders of knowledge, helped the first dynasties to consolidate their power. Many among them held important political posts, such as Ngô Chấn Lưu and Ðặng Huyền Quang.

They also provided the first poets and prose writers of Vietnam. One can say that under the earlier Le and Ly dynasties, Vietnamese literature was constituted a great deal of learned poetry and of Buddhist inspiration composed by monks among whom were Lạc Thuận and Vạn Hạnh. Lạc Thuận was assigned by king Lê Ðại Hành to greet Chinese ambassador Li Jiao ( or Lý Giác ). To take the latter across the river, monk Lạc Thuận disguised himself as a sampan rower. When seeing two wild geese playing on the water crests, Li Jiao began to sing:

Monk Lac Thuân did not hesitate to finish the quatrain on the same rhymes while continuing to row:

The parallelism of ideas and terms and especially the speed of improvisation of monk Lac Thuan struck the admiration of the Chinese ambassador. As for the second monk, Van Hanh helped king Lý Công Uẩn to get rid of the Ðinh decadents and found the Ly’ dynasty (1009-1225) that transferred the capital to Thăng Long (presently Hanôi). Van Hanh was not only a talented politician, he was also a poet. The Ly dynasty owed it rise to the influence and counsel of this monk, which explained the preeminence of Buddhism since that date. It thus became the state religion with a church run by a spiritual master of the kingdom (or Quốc Sự). Many of the sovereigns of this dynasty belonged to the sects Thiền (or Zen in Japanese or Tchan in Chinese).

They granted great favors to Buddhism, in particular Lý Thái Tôn, who, in 1031, after his victory over Champa, had over one hundred fifty monasteries built, not to include the construction of the famous one-pillar pagoda (Chùa Một Cột) following a dream. In spite of the beneficial influence of Buddhism, for the needs of a methodical organization and an effective administration of the country, the Ly dynasty had to adopt the Chinese model at all echelons of administration: the reshuffle of the hierarchy of functionaries (1089), the creation of exams (1075), the establishment of a imperial college (1076) (or Quốc Tự Giám) intended to teaching the children of the nobles, the creation of the Imperial Academy (1086) etc…Thanks to the development of lay education, the learned men began to replace the monks. Likewise, the diffusion of knowlege allowed the opening of a more varied and rich literature.

Buddhism declined and yielded to Confucianism only at the end of 13th century. This was due to several reasons: the struggle against the Mongols gave birth to a new leading class more Confucian than Buddhist lead by general Hung Ðạo Vương Trần Quốc Tuấn, the appearance of a new bureaucracy constituted of scholars and that of historical works to the detriment of Buddhist collections.

The Proclamation to The Troops ( or Hịch Tướng Sĩ ) by Hưng Ðạo Vương Trần Quốc Tuấn or the Grand Victory of Chương Dương celebrated by his lieutenant Trần Quang Khải by means of the following four verses:

We have taken aggressors’ spears at the port of  Chuong Duong,
And captured enemies at the dock of Ham Tu.
May peace be the object of our supreme effort
And this land last forever.

witnessed  the opening of a literature richer, more national and historical. One continued to see the decline of Buddhism until 1963, the year when monk Thích Quảng Ðức immolated himself by fire to protest the regime of  president Ngô Ðình Diệm of South Vietnam.

This sacrifice did not turn out to be useless because it permitted the hastening of the fall of Diệm four months later and showed the whole nation that Buddhism, in spite of its spirit of tolerance and non-violence, could constitute a notable counterbalance to combat any forms of dictatorship and totalitarianism whose aim is to undermine moral foundations and conceptions of truth and solidarity found in Vietnamese civilization.

Vietnamese Buddhism thus regains for some decades not only its political role but also the dominating place it has lost for so long.