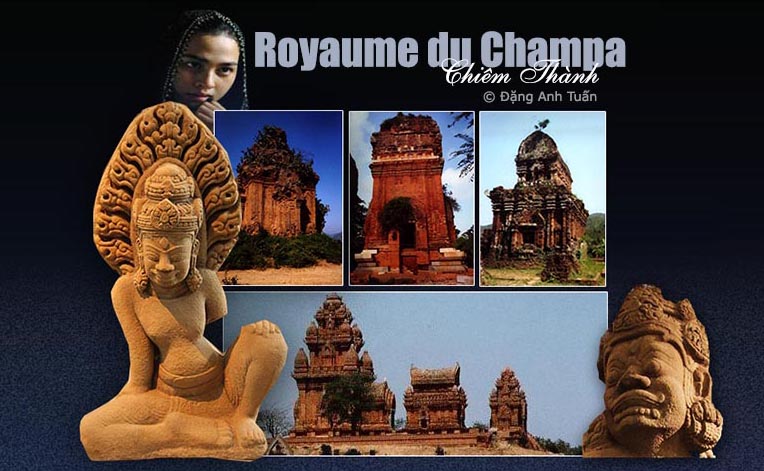 It is an ancient kingdom of Indochina known in the past as « Lâm Ấp » ( or Lin Yi )(192-749), then Hoàn Vương (Huanwang)  (758-859)  and finally  Chiêm Thành ( or Tchan-Tcheng in Chinese) (988-1471) and located in what is now central Vietnam, from the Anamitic cordillera   Hoành Sơn, Quãng Bình in the North to  Bình Thuân (Phan Thiết) in the south. The amazing Cham towers in red bricks and sandstone found in Ðà Nẵng and Phan Thiết are the sole silent witnesses of a civilization vanished in the turbulence of history.

The Cham were no doubts of Indonesian origin and occupied the coasts of central and south Vietnam from the neolithic time. In 2nd century, this sailors people adopted Hinduism in contact with Indian merchants, which gave birth to the Champa kingdom. A Chinese traveller of 4th century described them with a particular typical look: big straight nose, black and curly hair, practicing a funeral ritual that involves the cremation at the drum sound. The Chàm were not only excellent sailors but also formidable builders and ingenious farmers. The Chàm succeeded in achieving the unity of the country at the beginning of 5th century after having resisted several rounds of Chinese domination attempts. Their capital was located at Indrapura (Trà Kiểu), near Ðà Nẵng (former Tourane of the French ) from 7th to 9th century.

Thanks to the silk, spices, and ivory trade between China on one hand and India and the Muslim world on the other, this kingdom experienced a period of prosperity that was troubled first by the Khmers conquest in 1145-1147 then next by the expansion policy of Kubilai Khan’s Mongols. To face this domination, the Chàm sought alliance with Vietnam, which allowed the Chàm and the Vietnamese to come out victorious during this confrontation. To seal this union, a Vietnamese princess of the name Huyển Trân of the Tran dynasty, sister of king Trần Anh Tôn was proposed to become in 1306 the wife of the Champa king Chế Mẫn ( Jaya Simhavarman ) in exchange for the two Cham territories Châu Ô and Châu Rí, located at the Hai Vân Pass. These are no other than the two northern provinces Quảng Trị and Thừa Thiên of presently Vietnam (Huế). This union was of short duration. The Vietnamese continued to claim more land toward the South and the death of king Che Man a year after his marriage, without an heir, was only an additional pretext in the conquest of Champa. The king of Vietnam set up a plot by sending his general Trần Khắc Chung to rescue his sister, who had to be sacrificed according to the Cham tradition, at the funeral of her husband. The provinces of Châu Ô and Châu Ri’ became then the subject of discord between Champa and Vietnam.

The Cham had an awakening with king Chế Bồng Nga who struck the Vietnamese several times by ransacking the capital Thăng Long in 1372 and 1377. But he was assassinated in 1389 during a new invasion of Vietnam and his death marked the decline of the Cham. The Vietnamese annexed this kingdom around 1470 under the Lê dynasty with king Lê Thánh Tôn.

Today, the Cham are dispersed as a diaspora from Kampuchea to Malaysia and constitute one of the ethnic minorities of Viet-Nam. (less than 100000 Chams).