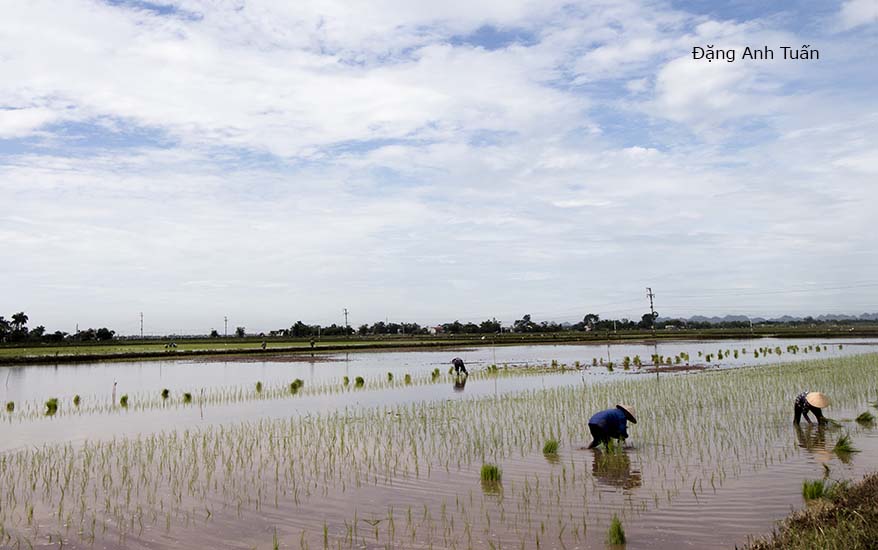 Vietnam is a land where the people loves peace, independence  and freedom. “Being Vietnamese”, is capable of resisting above all any form of assimilation or foreign ideology and be proud to have in  veins the blood of the dragon. For the Vietnamese, there is no doubt that through the myth (Con Rồng cháu Tiên) maintained throughout  ages, he is the descendant of this fabulous animal although he now knows his origin through scientific works. It is probably the heir of the Hoà Bình culture and the Phùng Nguyên culture and belongs to the Bai Yue, the ethnic groups living in the south of the Blue River (or Yangtze River) basin (Liangzhu and Shíjiāhé cultures).Water is such in osmosis with soil and because of that, his country is often referred to by two words Đất Nước (Soil – Water). It is also on the land of  Red River Delta (Sông Hồng) that was established several centuries before Jesus Christ, the first kingdom of Vietnamese nation with  mythical kings Hùng (civilization Văn Lang). This kingdom was then replaced by that of An Dương Vương with the famous citadel Cổ Loa as capital, a proof of its existence before the annexation initiated by Zhao To (or Triệu Đà), a general of Chinese emperor Shi Huang Di. The latter then founded the Nan Yue kingdom (Nam Việt), which had to give way to the Chinese occupation led by famous general Ma Yuan (Mã Viện) of Chinese Emperor Guangwu (Hán Quang Vũ Đế) for a thousand years before the war of liberation initiated by General Ngô Quyền. That made also disappear during this occupation the Đồng Sơn civilization. The latter is characterized by   situlas and  famous bronze drum showing the emblem of power and identity of the Vietnamese people who failed to be erased again by the “Middle Kingdom” throughout its history. This is not that of dynasties or large movements of ideas. But this is the history of tenacious peasant farmers who, from the border of China to the southernmost point of Cà Mau, works hard in rice fields and impose their mark in  landscape. The sacrifice is not an empty word. Their heroes prefer to be ghosts in the South instead of becoming  princes in the North. Their heroines do not miss the opportunity to respond to the nation’s call. This is the case of Hai Bà Trưng Trắc , Trưng Nhị, Triệu Ẫu , Nguyễn Thi Giang (Cô Giang) , Nguyễn Thị Minh Khai etc. .. No Vietnamese forget the immortal saying of Nguyễn Thái Học before his death:

Dying for his homeland.
This is the most beautiful fate, the most enviable …

Any foreign force then came to defeat the Vietnamese engagement on territory. The latter often refers to three key factors in their victory: Thiên Thời , Địa Lợi, Nhân Hòa (to be aware of the weather, to  know the environment and to have the popular support or national harmony). This is the last parameter that makes the difference in a war of attrition. Nguyễn Trãi had the opportunity to say he preferred to conquer hearts instead of citadels.

Facing the ennemies stronger than them, they must persevere in the formulas used in the theory of Yin and Yang: « Lấy Yếu Chống Mạnh (Take the WEAK to fight the STRONG) or » Lấy Cụt Chống Dài « (fight the LONG with the SHORT). This is the stratagem used by the scholar  Nguyễn Trãi to chase the Ming of Chu Di emperor (or Yong Le (Vĩnh Lạc or his reign name)), founder of the Forbidden City (Beijing) out of Vietnam in 1428. Using the mobility (Yang) of his army against the Qing’s immobility (Yin) in perfect harmony with the environment, strategist king Quang Trung succeeded in defeating the adverse camp in 1788 in a record time of 5 days to retake the capital Hànội. It is also the king who, taking advantage of the unknown ground conditions by his opponent, managed to interrupt the Siamese expansion of Chakri general in 1785 towards Cochinchine with intent to rescue Gia Long king by destroying his army composed of 50,000 men in the arroyos near Mỹ Tho at Rạch Giá- Xoài Mút with amazing speed. No people have resisted the Vietnamese people’s expansion. This is the case of the Kingdom of Champa in the center and the Khmer in the Mekong Delta.

In spite of the Chinese occupation during a millennium and foreign cultural contributions, these frail peasants with their feet stuck in the mud of paddy fields, were able to keep everything that is highly appreciated by the people of the world, their traditions and their language transcribed in Chinese and Romanized later with the Jesuit Alexandre de Rhodes arrival. Being part of the majority ethnic Bai Yue (Bách Việt), they are considered as the sole group not be sinicized over the centuries.  Wise Confucius had the opportunity to compare the strengths owned respectively by Northerners (Han) and Southerners (or Luo Yue, ancestors of the Vietnamese): courage and power (Dũng) for the first and kindness and generosity (Nhân Từ) for the latter. However, the profound and intimate attachment of the latter to their native land and their traditions makes them into inflexible people in the struggle. This makes them a pitiless and frightening conqueror for some and a legitimate defender of freedom and national independence for others. In any case, they are obliged to pay in the past a high toll on human lives for these two concepts (independence and freedom)  they do not usually choose or separate. It leaves them in a unspeakable suffering (Khổ Tâm). Nevertheless, nothing prevents them from having these elements, one after the other at the cost of their lives. A collective awareness begins to take shape in the 1920s with Nguyễn An Ninh. Despite the deportation of three young emperors Hàm Nghi, Thành Thái and Duy Tân in Algeria and Reunion and the guillotinement of several nationalists wherein is the young and talented Nguyễn Thái Học. This does not reduce their ardour in the revolt and allows the end of the French occupation with the victory at Điện Biên Phủ in 1954. The airdrop of 13 million tons of bombs (265 kg per capita) and sixty million liters of defoliants by the Americans does not discourage the Vietnam in the way of reunification in 1975, followed by the sending of several thousands of Southerners in the re-education camps and the exodus of a considerable number of boat people drowned and violated by the pirates in the East Sea (Biển Đông) and in the gulf of Siam in search of freedom. The dropping of 13 million tons of bombs (265 kg per capita) and sixty million liters of defoliants by the Americans does not discourage Vietnam on the way reunification in 1975, followed by sending thousands of Southerners in the reeducation camps and the exodus of a large number of boat people drowned and raped by pirates in the East Sea (Biển Đông) and the Gulf of Siam in search of freedom. According to some Western authors (Barry Wain, Magali Barbieri) having had the opportunity to work on this issue, the estimation of boat people perished at sea varies globally, but there are at least 250,000 victims. According to the estimate of UNHCR (UN High Commissioner for Refugees), in sixteen years, from 1975 to 1991, nearly one million Vietnamese (including 800,000 boat people) have fled Vietnam. The path of national reconciliation is a long way because it is full of pitfalls and blunders after three decades of war and suffering. A page of history turns but Vietnam must pay a very high price not only at the human level but also at environmental level because Vietnam continues to suffer still today the incalculable consequences of decades of war (agent orange for example). According to the Unesco Courier dating from the month of May 2000, the organization working under the aegis of the United Nations estimates that the fifth of the forests in southern Vietnam was destroyed by American herbicides.

Today, the young Vietnamese knows neither hatred nor the grief of the war of writer Bảo Ninh. The specter of war does not go away completely over the months in the East Sea with the archipelagos of Hoàng Sa (Paracels) occupied since 1974 and Trường Sa (Spratly) recently claimed by Northerners whose the threat is extremely aggressive. In the face of extravagant claims of the « Middle Empire », the epic poem entitled « Nam Quốc Sơn Hà » (or the Mountains and Rivers of the South countries) of victorious general Lý Thường Kiệt (against the Song), affirming the sovereignty of Vietnam on its lands, returns to haunt yet again his spirit and resonate in his private heart. Despite the growing concerns and worst conditions of life, it is unthinkable for him to forget a day this native land that he is accustomed to call under the term of « Quê Hương » because it is here that he relives his memories of youth, his school, his identity and his past. Although the land is synonymous with misery and poverty, it is his « raison d’être »because his ancestors have acquired it, acre by acre since four thousand years with tears, blood and sweat. Like her mother, this country is unique and irreplaceable for each Vietnamese. Besides his native village, the image of the communal house (or Đình ) or the bamboo or  buffalo remains anchored forever in the collective memory. For those who live abroad , this is a transitional period of their lives but it is never an end in itself. The shadow of Quê Hương continues to cling to them and pursue them with tenderness and regret etc.